If you're concerned with recent developments around climate change, you may be thinking of putting your money where your mouth is and switching to an ethical super fund or bank.

The latest biannual report on the climate by The Bureau of Meteorology and the CSIRO on Friday 13 November revealed that climate change is indeed still happening at the moment, despite the pandemic dominating the news cycle this year.

According to the report, Australia’s climate has warmed on average by 1.44 degrees since 1910, leading to increased frequency of extreme heat events.

Among other trends noted in Australia, rainfall has decreased significantly since the 1970s and sea levels are rising to more frequent extremes, leading to an increased risk of inundation and damage to coastal infrastructure and communities.

“Our science clearly shows that, due to increasing greenhouse gases, such as carbon dioxide, in the atmosphere, Australia’s climate is continuing to warm, and the frequency of extreme events such as bushfires, droughts, and marine heatwaves is growing,” Director of CSIRO’s Climate Science Centre Dr Jaci Brown said.

"In fact, we think of this decade being hot, but this decade will be one of the coolest in the next hundred years." 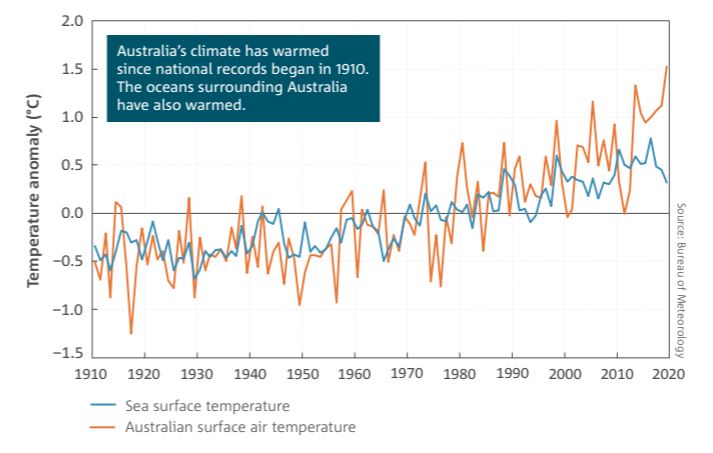 The report notes that in the future, Australia will continue to experience more heat extremes and fewer cold extremes thanks to climate change, as well as more rising sea levels and increasingly long dangerous fire seasons.

This number might seem small, but it’s having a big impact. E.g. 2019 had 43 extremely warm days, more than triple the number in any of the years prior to 2000 https://t.co/1ABYDFQwdV #StateoftheClimate @CSIRO pic.twitter.com/fVlFXyE5Ft

The release of this report, combined with the election of a more climate-focused Biden Administration in the United States, has heaped some pressure on the Federal Government to take more urgent climate action.

"I think this is a big challenge going forward and it's going to take a lot of countries all working together and getting on board to meet this challenge," Dr Brown said.

When asked if the Australian Government would now join the United States in setting a net-zero emissions target by 2050, Prime Minister Scott Morrison declined to say if this would happen.

"Australia will always set its policies based on Australia's national interests and the contributions we're making in these areas," Mr Morrison said.

"[The] United States will make their decisions based on their interests and their capabilities and how their economy is structured and we'll do the same."

Scott Morrison has been asked if Australia will join Joe Biden and embrace net zero emissions by 2050, as pressure mounts on the Australian government to act on climate change by global leaders #auspol pic.twitter.com/rXcB56MMP7

If you feel that Australia's current progress on climate change isn't enough, you aren't actually powerless: You can do your bit to help Australia combat the effects.

While using metal straws or keep cups is admirable, one of the most effective ways to fight climate change is with your wallet.

Switching super funds could be the place to start.

How changing super funds can make a difference

Australia's superannuation industry is enormous - the largest collective pension in the world in fact - with assets totalling around $2.7 trillion in March 2020, according to the Australian Prudential Regulation Authority (APRA).

That's one and a half times Australia's entire GDP, and is projected to grow to $5 trillion by 2030 according to Deloitte.

Super funds hold a lot of influence over the Australian economy, as they invest in a number of assets for their members like shares, property, bonds as well as infrastructure projects and emerging markets.

Deloitte also projects super funds will collectively own up to 60% of all ASX-listed shares in 20 years, and according to Climate Works Australia, they're acutely aware of the commercial implications of climate risks.

"The long-term investment horizons of superannuation funds make them acutely vulnerable to the systemic disruptions associated with climate change," it said.

Kirstin Hunter, CEO of climate-focused super fund Future Super, said the release of CSIRO's report is another proof point that Australians must take action on climate change - and that switching your super could be the way to do it.

“We know that climate action is a top priority for many Australians, and action can be taken through the power of our retirement savings. Superannuation is worth $3 trillion and is the largest pool of capital in the country," Ms Hunter said.

“To put the sheer scale of superannuation into perspective, the money sitting in Australia's super would be enough to fund our transition to 100% renewable power ten times over.”

"Every 34 people who join Future Super take about $1M out of fossil fuels when they switch to us. That’s based on an average balance of $30,000," Ms Hunter told Savings.com.au.

"We don’t have to wait for companies or governments to act, individuals have a huge amount of power in their super and can push for change today.

"Throughout the duration of 2019, Future Super’s members' investments avoided carbon emissions similar to taking over 27,000 cars off the road."

What makes a super fund 'ethical'?

'Ethical' super funds are broadly defined, but can be generally considered as funds that only invest in things that have a positive impact on the community, such as renewable energy projects, clean transport and infrastructure, companies that don't test on animals and so forth.

Non-ethical funds on the other hand might invest in:

According to Market Forces, there are only five completely ethical super funds at the time of writing:

Meanwhile, some funds with portfolios that claim to be "socially conscious" may not be entirely so, still investing a small or not so small percentage of its portfolio in fossil fuel industries, which includes names like Australian Super and Sun Super.

Other super funds have recently committed to being carbon neutral by 2050, such as CBUS, HESTA and Aware Super (formerly First State).

Rest Super was recently taken to court by a 25-year old member in a historic case, forcing it to commit to net-zero by 2050.

According to Climate Works, 60% of Australia's top 20 super funds by assets are "undertaking activities to reduce emissions intensity of their portfolios but are not in alignment with net-zero by 2050", while another 20% have no disclosed emissions commitments, such as Colonial First State. 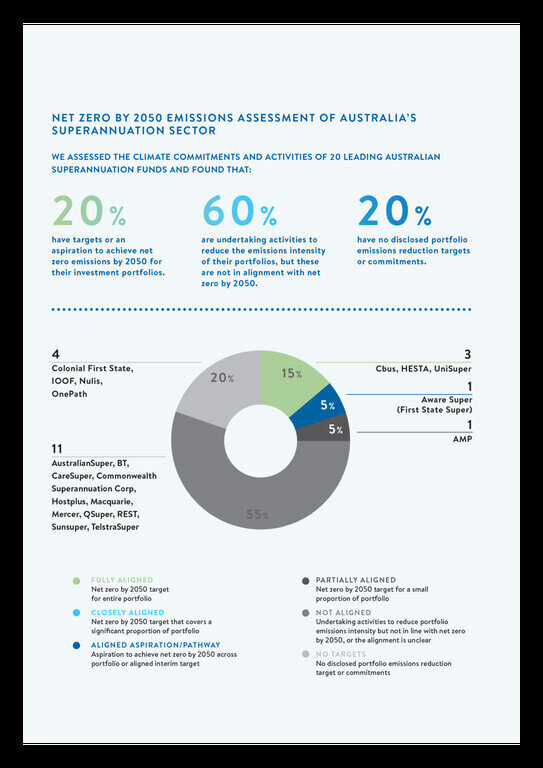 How do ethical super funds compare in terms of returns?

An important question to consider is how switching to an ethical super fund can affect your retirement returns, either through lower yearly returns or higher fees.

This is worth asking, as ethical funds with screening practices are naturally limiting themselves to fewer investment options.

There's no real evidence to suggest that ethical super funds give greater or worse overall returns compared to non-ethical funds, although there is a smaller sample size to choose from.

A Choice review of ethical super fund data given to APRA found that only Australian Ethical Super was in the top quarter of funds for five-year returns, but did rank very highly at sixth and was well above the market median.

Another fund claiming to be ethical, Christian Super, came in 64th, below the median.

Remember: Past returns are not an indicator of future returns.

Choice's report however did find that ethical funds did charge higher fees on average compared to the median MySuper product.

This is important to know, as the Productivity Commission found even a 0.5% difference in fees can cost the average person as much as $100,000 by retirement. According to Choice, this could be because ethical funds may have to spend more time and money researching their investments in order to screen them properly.

But past data on super fund performance doesn't guarantee future performance, and there's every chance ethical or non-ethical funds could outperform the other.

People wanting to switch their super should examine the fees, performance data and investment portfolios of the fund in question and make up their own mind: It's possible to get both an ethically-based super fund with higher returns, but some may be willing to accept lower returns in a fund that aligns with their values.

Switching super funds (and your everyday banking too) can be the most direct way you can change the direction of Australia's climate policy, as the more Australians invest in renewables and less in fossil fuels, the more pressure will be placed on State and Federal Governments to act.

But this doesn't mean you should just pick the first ethical fund you lay eyes on:

Switching your super is a big commitment, as you're talking about moving your potential retirement savings. Where you invest this is important, and choosing the wrong one could be devastating.