Nearly half of NAB's deposits earning near 0% interest Photo by Kenny Timmer on Unsplash

Nearly half of NAB bank deposits are earning at or near 0% in interest, according to its latest figures.

That's up significantly from a quarter of NAB's deposits last year.

As of September 2020, $121 billion of these deposits are in transaction accounts, which historically tend to earn little to no interest, but a further $217 billion is deposited in either savings accounts or term deposits, which do earn interest.

NAB's showcase of its deposits earning little to no interest could be emblematic of the market as a whole, as NAB has the third-most customer deposits in the entire market according to regulator monthly banking statistics.

The second biggest, Westpac, revealed it has $550 billion in deposits in its own full-year results as at September 2020. 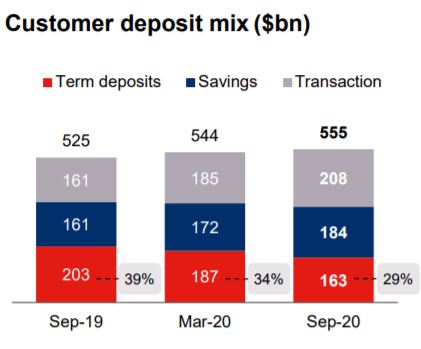 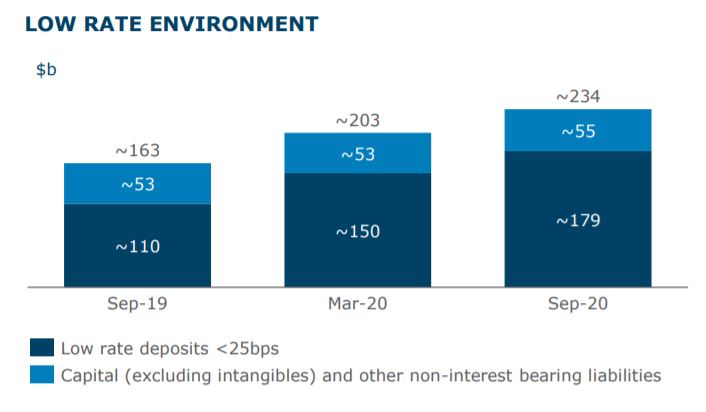 Australia's largest bank by deposit size, Commonwealth Bank, did not reveal an interest rate breakdown in its full-year results, but did say its deposit funding has increased from 69% in 2019 to 74% in 2020, now having more than $580 million in deposits as of September.

Deposits overall have increased among every major bank over the last several years, as well as across most other banks.

The COVID-19 pandemic exacerbated this trend. From March to June, when pandemic fears were at its peak, household deposits rose by 6.4%, or $64 billion, indicating a stockpiling of cash.

The household savings rate meanwhile increased immensely over the June quarter, rising from 2.5% of income to 19.8%.

This is a huge problem for those who rely on these deposits to earn an income, as deposit interest rates have plunged over the past year.

Now, after comparing the market again, the average term deposit rate across all terms sits at roughly 0.75% p.a.

After this week's 15 basis point cut, the cash rate now sits at an unprecedented 0.10%.

This has made things even harder for savers, and Reserve Bank Governor Philip Lowe said those hardest-hit needed to carry a "heavy share of the burden for the collective good".

"In reaching today's decision, the Board also considered the effects on medium-term financial and macro stability as well as the impact on savers," Mr Lowe said.

“Lower rates will help support spending and ultimately will create jobs, so the broader community will benefit from today’s decision."

Mutuals shine, increasing term deposit rates by up to 1.00% p.a.

Does your term deposit have automatic rollover?