How to increase your credit limit (and whether you should) Photo by tom coe on Unsplash

Maxed out a credit card or two recently? You can always try and get your credit card limit increased, but it’s not always a good idea to do so…

What is your credit limit?

Your credit limit is a limit set by your credit card provider that caps the amount of money you can borrow on that credit card at any one time. Determined by the credit provider during your application based on your financial status, history and credit score, credit limits can vary significantly depending on the card and the person.

A person with a low income applying for a low-fee or low-rate card will probably get a low credit limit of maybe a few thousand dollars, while a big-shot executive applying for a card using the wifi on their private jet will likely get a much higher (or even unlimited) one.

If you have a credit limit of $5,000, that means you cannot have more than $5,000 of unpaid debt on that card at any one time. So if you reached the limit and paid off $2,500 one month, you’d only be allowed to spend $2,500 the next month until the limit gets hit again. And when it does, you’ll be prevented from spending any more and possibly even face the prospect of having your account closed.

At the moment, the average credit limit in Australia sits at around $9,300. This figure has fallen slightly recently but is still pretty close to the highest it’s ever been. 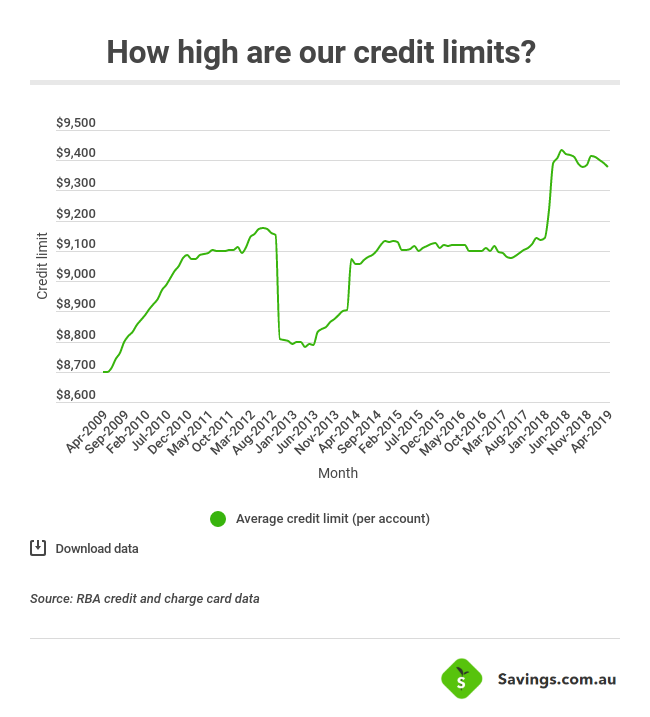 But for some people, this much might not be enough.

There are a number of reasons why you might want an increased credit limit, the most obvious being you keep hitting the one you currently have. While you might associate reaching your credit limit as a sign of reckless overspending (which isn’t entirely unwarranted), hitting your credit limit isn’t always a bad thing for responsible credit card owners.

For example, some people choose to put all or most of their regular spending onto a credit card in order to maximise rewards points. In this instance, not having a high enough credit limit could limit the amount of rewards you could earn.

In addition to increased spending power, a bigger credit limit can also give you a bit more leeway for a rainy day or an emergency. One of the main benefits of credit cards is they can be used at a moments notice, which can make them handy for situations where money is desperately needed.

This isn’t a recommendation to go out and blow thousands of dollars on an ’emergency’ TV, but if you were in something like a car accident and needed money quickly, a bigger credit limit could help here.

Is it a good idea to increase your credit card limit?

Having a higher credit limit won’t always be a good thing. For starters, being able to spend more on a credit card can lead to higher levels of debt – the average credit card debt per person in Australia has been consistently hovering around $2,000 for some time now.

Another reason for avoiding higher credit limits is the potential risk they can pose to loan applications. A lender will typically judge the credit limits on any credit cards you have as actual debts, even if there’s no outstanding debt on the card or if you have a good track record of consistently paying off the debt.

Lenders don’t really care about your outstanding credit card balance – to them, it’s your credit limit that matters. For example, if you have a credit card with a $20,000 credit limit and a back-up one with a $5,000 limit, a home loan lender may judge you as someone with a $25,000 debt on their hands. So having a bigger credit limit will generally limit your borrowing capacity.

Does a credit limit increase affect your credit score?

Here, lenders generally assume your credit limit is fully-utilised when assessing your application for credit. So if you’ve got your sights set on the property market in the near future, maybe consider reducing your credit limit.

Additionally, applying for a higher credit limit and being rejected will cause a credit inquiry to appear on your credit history. If too many of these show up, your credit score can suffer, which in turn can make it even harder to apply for other credit or lending products in the future.

So to summarise these points:

How to increase your credit card limit

Recent rule changes – including July 2019’s New Banking Code of Practice – have made it so banks and credit providers are no longer legally allowed to offer unsolicited credit limit increases. That is, they can’t call you out of the blue and tempt you. Instead, you have to make the first move and contact them. If you look again at the infographic near the beginning of this article, you can also see the point in 2018 when it was announced by ASIC that credit providers had to judge an applicant’s ability to repay a credit limit within three years instead of the previous five, which caused credit limits to fall.

New laws designed to reign in consumer debt will make it harder to get approval for a new credit card, or to increase your credit limit. https://t.co/dIKIXO6M9c #7News pic.twitter.com/ByOpT90lnh

So you have to contact your credit card provider to get an increase. How to do this varies based on who you’re with. You might have to either call a specific number, fill out an online credit limit increase application form and email it to them, visit a branch if they have one or log in to their app or online banking portal.

As an example, here are the various ways each of the big four allow their customers to request credit limit increases:

While credit card providers have the right to decrease your credit limit at any time (with prior warning of course), they are under no obligation to accept your request for a credit limit increase. But you can increase your chances of being approved, which we’ll look at now.

Tips for getting approved for higher credit limit

As mentioned before, a credit provider can actually decrease your credit limit at their own discretion, so it’s important to make a good case for yourself.

How to know the limit of my credit card?

You can also contact your bank via these methods (mail, app or online banking) to request a credit limit increase or decrease.

Is credit limit monthly or yearly?

Most people just assume their credit limit is monthly because they pay their credit card bills monthly, but this isn’t technically the truth.

What is the charge if you exceed your credit limit?

The biggest penalty you’ll face now for going over your credit limit is having future transactions decline until you’ve paid down your debt below the limit again.

Technically, there is no such thing as the highest credit card limit. There are dozens of high-flying premium credit cards on the market that have no maximum limit, encouraging extra spending with attractive rewards programs and features.

The average credit card limit in Australia is around $9,500, according to the Reserve Bank, while among cards that do have credit limits, the highest is usually around $100,000. But this is just for the typical customer, as you can get a higher credit limit than this on a case-by-case basis by asking your bank for one.

What’s the minimum credit limit on a credit card?

How many on time payments do I need to raise my credit limit?

A more responsible credit card user is more likely to get approved for a credit limit increase than someone who regularly misses repayments. Although there’s no set limit among banks for how many times you need to miss repayments before you can be approved for a credit limit increase, you should try to go at least a few repayment periods where you fully pay off your balance in full every time.

Increasing your credit limit can work in your favour if you’re one or several of the following:

But decreasing your limit can work too, especially if you’re someone who has struggled with overusing a credit card or three in the past, or you’re thinking of applying for a home loan soon and want to boost your creditworthiness.