RBA: Rents to remain below pre-COVID levels for several years The COVID-19 pandemic has had an 'unprecedented' effect on the rental market, and the Reserve Bank says rent growth in many areas will remain subdued over coming years.

The Reserve Bank of Australia (RBA) has released a new report, 'The Rental Market and COVID-19', as a part of its September Bulletin.

As a part of this report, the RBA analysed the effects that the pandemic has had on the rental market.

The report found government policies to support renters and landlords, such as moratoriums on evictions, land tax discounts and income support measures like JobSeeker have shielded much of the market from substantial impacts.

However, rents have still declined, and will likely remain at lower levels for some time.

COVID's impact on the rental market

Australia's rental market has been growing over the years and now represents around one-third of Australians in the market, compared to less than 20% in 1998.

Renters tend to be younger than owners, with close to two-thirds of households headed by someone under the age of 35 renting.

According to the RBA, renters also tend to have lower-incomes, spend a bigger share of their income on housing costs and predominantly work in industries the most exposed to the virus (accommodation, food, arts etc). 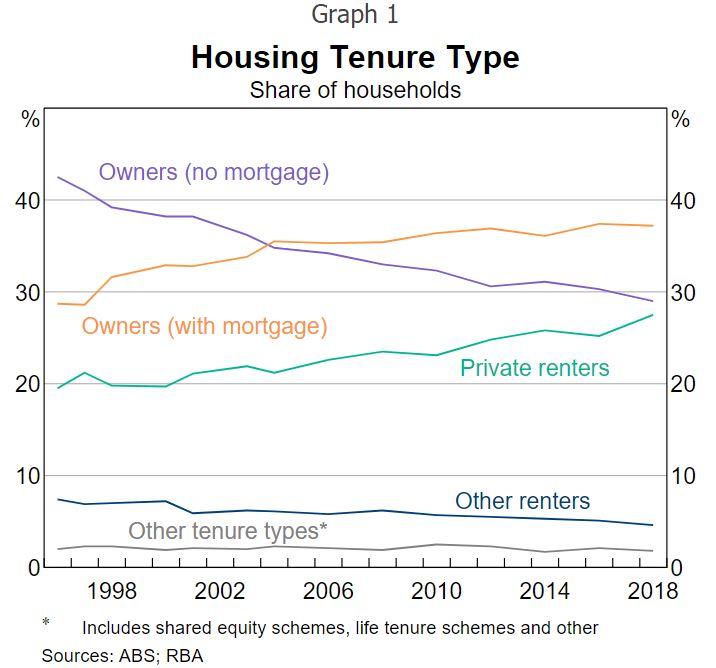 "In the wake of the pandemic, the rental market has experienced shocks to demand and supply. Weak labour market conditions, including the temporary closure of many service businesses, have reduced demand for rental properties as households have consolidated to save money and requested rent reductions or deferrals," the report said.

"On the supply side, with the number of international tourists and domestic travellers falling, a large number of short-term accommodation providers have shifted their properties onto the long-term rental market.

"The vacancy rate has increased sharply in some markets."

Government support has been important

So far in the pandemic, state and federal governments have announced a series of protective measures, including:

The government also encouraged 'good faith' rent reductions between landlords and tenants, which have yielded varying levels of effectiveness.

Reports by the likes of Better Renting show rent reductions were granted to very few tenants overall, while the likes of property management platform MRI found rental discounts continued to occur throughout the pandemic.

By August, around 14% of renters had received some form of rental relief. 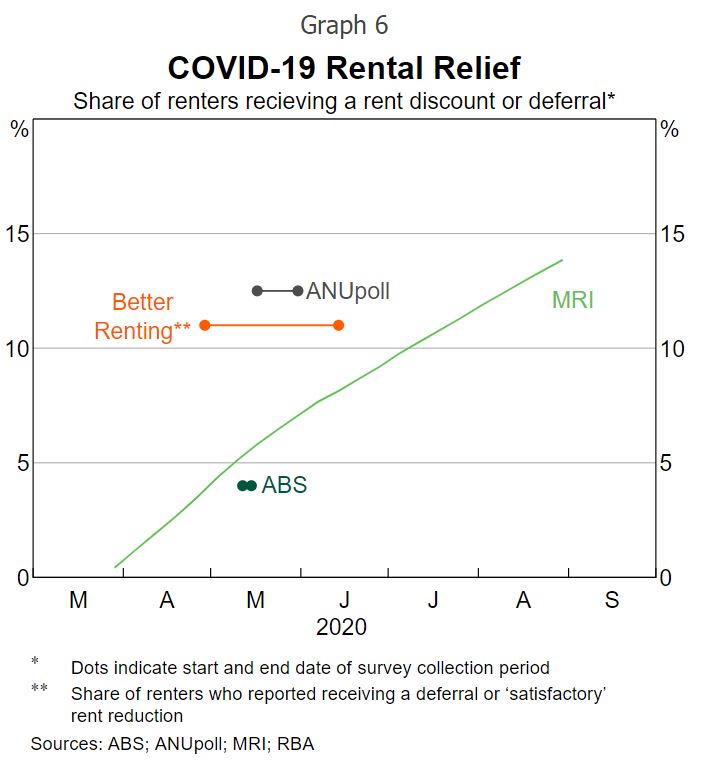 "These policy measures combined with the provision of income support measures, including the JobKeeper program and the Coronavirus Supplement, helped offset the acute fall in rental demand and stabilise the rental market," the report said.

"Rent payment relief on existing leases has been an important way the rental market has adjusted."

Discounting and deferral activity increased sharply in the last week of March – coinciding with the announcement of the six-month moratorium on evictions – and peaked in April.

Discounts and deferrals slowed in May and have remained low in a lot of states, with the exception of Victoria and New South Wales.

"In Victoria, the discounting rate peaked at a lower level in May and increased again following the reinstatement of restrictions. In most other states and territories, discounting rates have returned to around their early-March levels," the RBA reported. 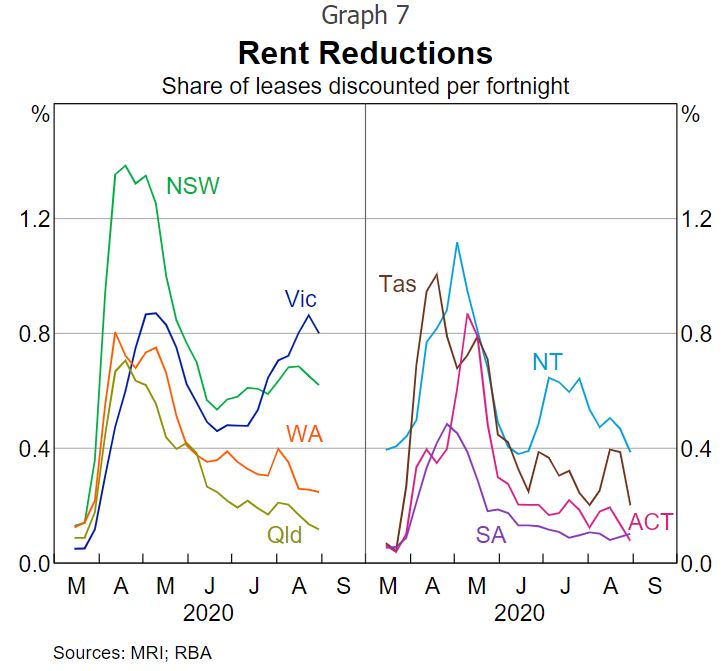 Rent on the decline

According to the RBA, the increased vacancy rate is putting downward pressure on rents as landlords begin to compete for tenants, not the other way around.

Advertised rents for apartments have fallen by much more than for houses, with the declines particularly pronounced for units in Sydney and Melbourne, data that is supported by the likes of CoreLogic and Domain. 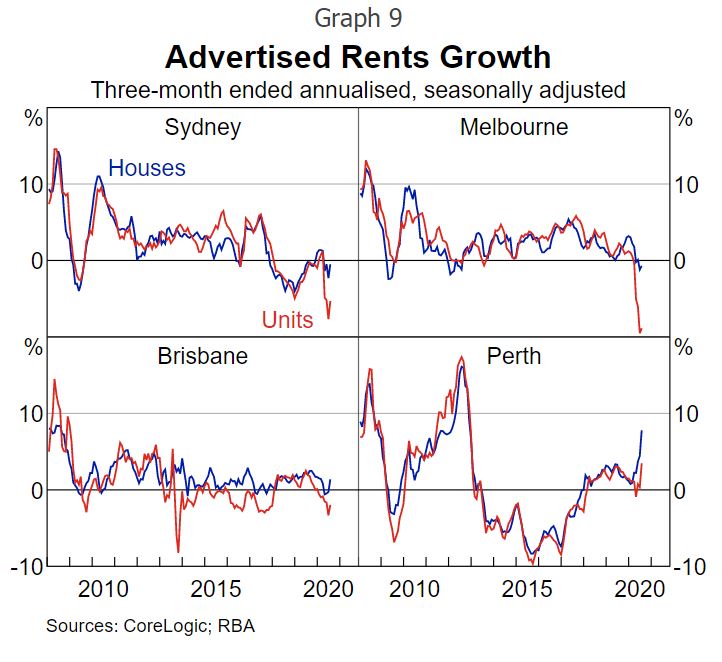 "The falls in advertised rents have also been largest in the inner areas of Sydney and Melbourne," the report said.

"These areas were more adversely affected by declining demand from fewer international students and the conversion of short-term accommodation to the long-term rental market. These were also areas where employment was disproportionately affected by lockdowns."

Suppression of the virus the key to increasing rents again

Overall, rental income for landlords has fallen for landlords, with CPI rents falling by 1.3% in the June quarter, the first ever quarterly decline.

"... prices have adjusted in the rental market at the fastest pace in several decades. This has reflected both sharp declines in advertised rents for new leases and also rent relief on existing leases, encouraged by government policies to limit evictions and promote rent negotiations for the affected tenant," the report said.

"The available evidence suggests these measures have been effective: rent discounts and deferrals rose sharply and remain above pre-COVID-19 levels in most states; and search interest for rental properties and bond lodgements in Sydney are high, suggesting renters who are able to do so are moving to realise lower rents.

"Income support measures have also smoothed the shock by reducing the magnitude of price adjustment needed, and likely reduced the number of tenants breaking leases."

According to the RBA's report, how long rents will stay low depends on how well the virus is contained.

"In the near term, the successful suppression of COVID-19 and the controlled reopening of international borders in 2021 would result in increased rental demand in inner Sydney and Melbourne, reducing vacancy rates and supporting rents," it said.

"Alternatively, setbacks in controlling the virus in Australia and internationally may delay the reopening of international borders, prolonging the loss of demand from international tourists and students.

"Over the next few years, it is likely that rents in these inner-city areas will remain lower than expected pre-pandemic given lower population growth and the anticipated supply of apartments coming online in these markets."