Lack of migrants to send rents tumbling in Sydney and Melbourne Photo by Nate Watson on Unsplash

Net overseas migration (NOM) has accounted for 51% of Australia's population growth in the last thirty years, and 60% since late 2016.

"This phenomenon is already being observed, particularly across inner Sydney and Melbourne," Mr Lawless said.

"Once foreign student arrivals start to normalise, rental demand in these areas may improve.

"In the meantime, investors who own property in these locations are likely to be facing high vacancy rates, lower rents and reduced ability to service their mortgage."

Mr Lawless said stalled NOM was also likely to see a higher proportion of units settling with a valuation lower than the contract price, again particularly in Sydney and Melbourne.

"ABS (Australian Bureau of Statistics) building activity data showed there were more than 50,000 units under construction across NSW at the end of March, and just over 45,000 across Victoria," he said.

"A large proportion of these are high-rise projects in inner city locations.

"Many of these yet-to-be completed projects will settle while rental vacancies remain high and rents are falling, which may put downwards pressure on property values."

Last year 84% of all overseas migration flowed into the nation's capitals, with three quarters of those taking up residence in Sydney and Melbourne.

Mr Lawless said the impact of the sharp fall in overseas of arrival was already being felt, with rental listings doubling in some inner city precincts.

"Between mid-March and early-August, the number of homes available for rent in Melbourne’s Southbank rose by 117% to reach 1,230 advertised rental listings," he said.

"Rental ads were up 111% across the Sydney CBD/Haymarket/The Rocks region to reach 776 and Melbourne’s CBD saw a 105% lift in advertised rentals taking the total number of homes available to rent to 2,184." 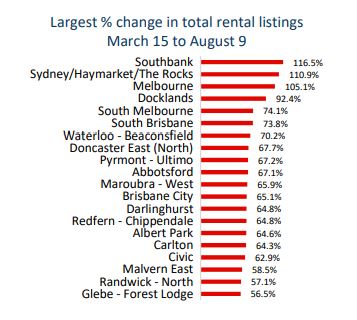 However, this couldn't all be attributed to declined NOM, with these areas also greatly affected by the rise in unemployment.

Mr Lawless said the rise in listings was already weighing on rental income, most prominently in units.

"Every capital city is showing a larger fall in unit rents relative to house rents through the COVID period to-date, with a more significant difference in Melbourne and Sydney where unit rents are down more than 4% since March."

Local migration to increase in importance

"Internal migration flows are influenced by a range of factors, but local economic and labour market conditions are key draw cards, as well as lifestyle and housing prices," Mr Lawless said.

"There are already signs that major regional centres are benefitting from increased demand as some people look to escape the large cities, taking advantage of remote working opportunities, more affordable housing options and lifestyle considerations."