The most affordable and liveable suburbs in Australia revealed New analysis has lifted the lid on the most affordable and liveable suburbs in Sydney, Melbourne, Brisbane, and Hobart in the second half of 2020.

Research from PRD Real Estate found Padstow Heights (Sydney), Bundoora (Melbourne), Boondall (Brisbane), and Kingston (Hobart), were some of the best suburbs for houses in terms of affordability and liveability.

Bundoora and Kingston also featured in the best suburbs for units, as did Sans Souci (Sydney), and Griffin (Brisbane).

Other factors like sales transactions, rental yield, and total estimated value of future project development were also taken into account.

PRD chief economist, Dr Diaswati Mardiasmo said some trends seen in the first half of 2020 had continued into the latter half of the year, despite the tumultuous period.

"It is evident that in general, Sydney and Melbourne have the highest entry prices, yet the lowest rental yields, Dr Mardiasmo said.

"This is a similar pattern to the 1st Half 2020 report, despite COVID-19 restrictions and further lockdowns in both capital cities.

"Hobart median prices are now on-par with Brisbane, which suggests affordability in Hobart has declined."

Dr Mardiasmo said Brisbane took the gong for most affordable and liveable city.

"Comparing all affordable and liveable suburbs within all capital cities, Brisbane arguably provides home buyers and investors with the most “bang for buck”.

"This is particularly true in the unit market, due to having the lowest median prices and highest rental yields." 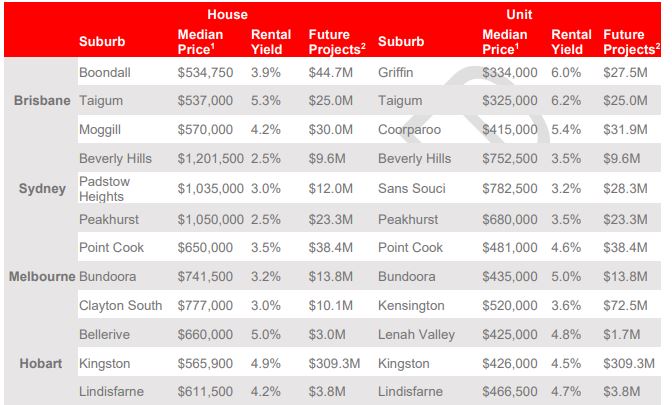 Sydney and Melbourne most affordable for liveability

PRD analysed affordability versus liveability in each capital city by finding the percentage difference between the state average home loan and the median unit and house prices in metro areas and the aforementioned affordable and liveable suburbs.

The cost of liveability was found to be the highest in Hobart, recording the only positive premium difference.

Dr Diaswati said Sydney was the most affordable city for liveability, closely followed by Melbourne, with both recording large negative premium price differences.

"This finding may surprise many, as Brisbane and Hobart were originally thought of as the more affordable capital cities," she said.

"While this may be true from a median property price perspective, many affordable suburbs in both capital cities fail to satisfy other criteria such as liveability, investment return, and future project development plans."

PRD's analysis of access to the market found the Sydney Metro and Brisbane areas to be a haven for first-home buyers.

"The bulk of both house and unit sales in Sydney and Brisbane were in the lower-middle price brackets, although there was a significant difference in actual median property prices," Dr Diaswati said.

However, Sydney was the most expensive capital city for both houses and units, with its middle price brackets substantially higher priced.

Melbourne was found to be a "split" capital, with equal activity in lower and premium price brackets.

Hobart was found to be the least first-home buyer friendly capital city market, particularly for houses, with the bulk of house sales in the premium price bracket.