Home / News / Eight in 10 Jobseeker recipients on it for more than a year: ACOSS

Eight in 10 Jobseeker recipients on it for more than a year: ACOSS A new report revealed that many people who lost work during the pandemic are at risk of long-term unemployment.

According to a new report from the Australian Council of Social Service (ACOSS), this is a situation with only a 25% chance of 'escape'.

Eight in ten of the 826,000 people on JobSeeker have had to rely on income support for over a year.

Additionally, over half (55%) of these people have a disability and almost another half (46%) are over 55 years old.

ACOSS's report said this points to 'widespread discrimination' in the labour market.

The chance of securing full-time work falls from 50% after one year to 25% after two years according to ACOSS.

The current number of people on unemployment support is over double the previous peak of 350,000 - after the 1991 recession - which prompted a billion-dollar investment in employment assistance.

"At just $1,600 per person for ‘jobactive’, we are now spending less than half the Organisation of Economic Cooperation and Development (OECD) average level on employment services," Dr Goldie said.

"Employment services with excessive caseloads are reduced to enforcing ‘tick-a-box’ compliance with unrealistic and ineffective ‘mutual obligation’ requirements such as applying for 20 jobs a month and participating in Work for the Dole."

Two thirds of people on JobSeeker and Youth Allowance only have their high-school qualification, yet 'entry level jobs' are falling.

Dr Goldie said long-term unemployment is at 'crisis level' the government should respond with 'urgency'.

"If we are serious about preventing and reducing prolonged unemployment, we need a complete change of approach," Dr Goldie said.

"Instead of punitive Work for the Dole programs, financial destitution and brutal compliance that succeed only in demoralising and humiliating people, we need a flexible jobs and training guarantee for all people unemployed long-term, including paid work experience and training, based on individual needs."

While Australia does have a lower unemployment benefit than the OECD average, it is one of the few to exist in perpetuity. 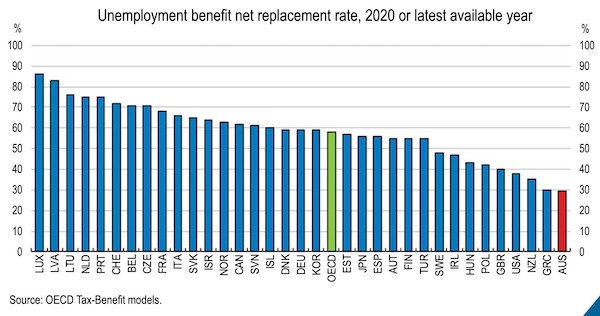 Image by The New York Public Library on Unsplash