A new housing outlook report predicts both the Gold Coast and Sunshine Coast are on track to outpace Brisbane property prices by 2024.

"A key theme of the report is the change to migration patterns," Mr White said.

"With Australia’s international borders effectively closed, the usual influx of international migrants and outflow of Australians is not having its usual impact on the housing market.

"And while cities have long been the centre of commerce and community, many of us made the decision to leave cities for regional towns.

"This shift in housing preference will be interesting to watch over the next few years."

The greater Brisbane median house price was $684,000 at June 2021, a 19% rise on a year earlier according to BIS Oxford Economics' research.

As price momentum slows and the prospect of rising interest rates loom, QBE said they expect that the pace of growth in most markets will fall.

Despite large gains in the past 18 months, Brisbane will remain relatively affordable when compared to Sydney and Melbourne, and the expected sustained interstate migration will help prevent a sharp slowdown in momentum in 2022/23 and 2023/24.

QBE's report predicts a median house price of around $806,000 is expected by June 2024, representing total three-year growth of 18%.

While powered by the uptake in remote working and extremely low interest rates in 2020/21, interstate migration will continue to fuel dwelling demand in the Gold Coast.

Recent Domain data shows Surfers Paradise was the number one suburb in Australia for property turnover in the last year, with Southport and Broadbeach also making the top 20.

Migration numbers to the Sunshine Coast paused briefly during 2020 as interstate borders were closed, however have now returned as remote working has grown.

QBE expects these trends of brisk population growth to persist into 2021/22, so long as the freeze in interstate arrivals into Queensland is short lived.

As a result of reduced travel restrictions and continued attractive borrowing conditions, the median house price in the Sunshine Coast is forecast to continue to slightly outgrow price growth in Brisbane.

No longer the 'little siblings' of Brisbane

"Living in Gold Coast or Sunshine Coast with a job in Brisbane used to be a daunting aspect, however now it is becoming the norm. More business movement between the three local councils is enabling those who feel priced out of Brisbane to move to untapped areas in Sunshine Coast and Gold Coast.

"It is not a surprise that there is an demand and supply imbalance at present, which is more prevalent in the Sunshine Coast, especially when it comes to ready-to-sell stand alone houses/dwellings – there is a stark difference here."

Recent PRD research shows over the past five years the Gold Coast in particular has recorded double digit median price growth for both units and houses.

'Middle ring' houses had the strongest growth, up 32.5%, however the Gold Coast still presents strong affordability compared to other cities on the east coast.

"I find it fascinating that the Gold Coast is the only major city house market - compared with Sydney, Brisbane, Melbourne, Perth, Hobart, and Canberra - that has equal opportunities, in both inner and middle rings, in the most affordable price brackets," Dr Mardiasmo told Savings.com.au in September.

An explanation of Gold Coast's middle and inner ring suburbs is at the bottom of this page. 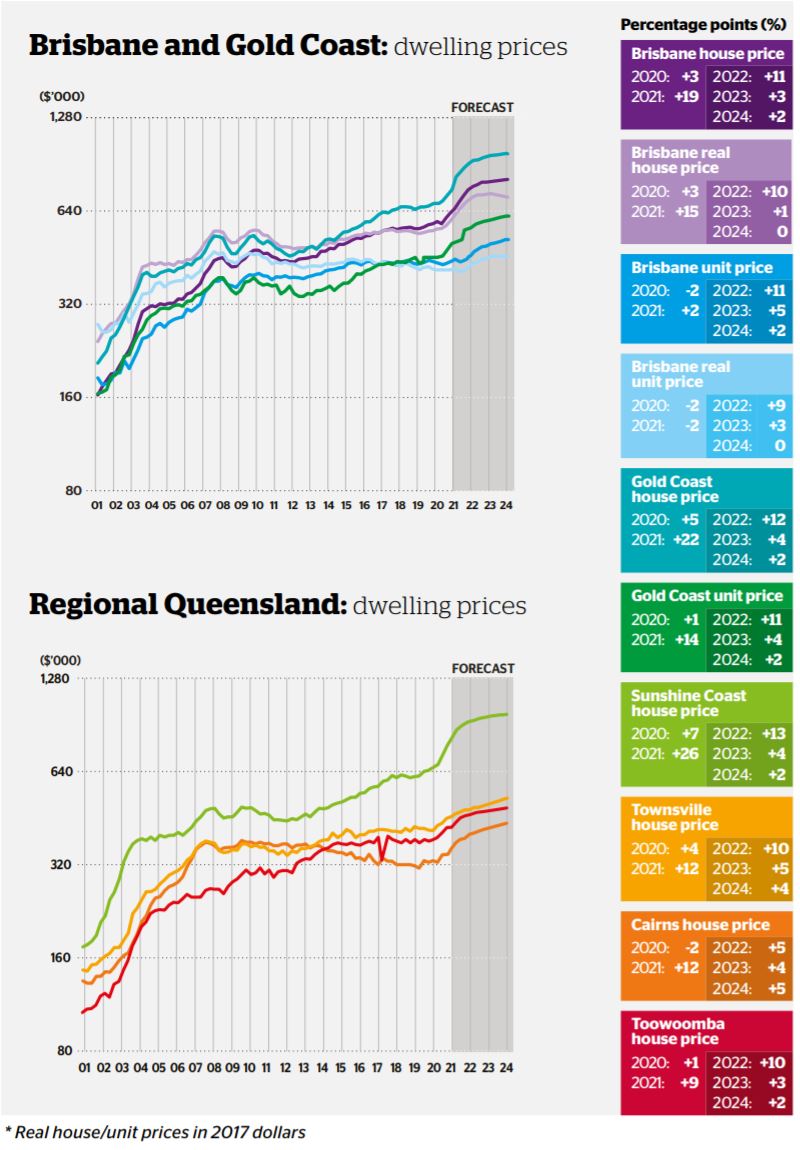 Image by Yulia Ryding via Unsplash