The Australian Council of Social Service has once again called for the JobSeeker rate to be lifted permanently, as new figures suggest unemployment is as high as 12%.

The Australian Council of Social Service (ACOSS) Senior Advisor Charmaine Crowe told AAP that the unemployment payment JobSeeker needs to be permanently raised after March, saying it won't be enough this coming April.

“Millions are facing agonising decisions like whether they will be able to afford to stay in their homes, and which essential items - like food, bills or medicine - they will have to cut back on even further," Ms Crowe said.

“The government must permanently increase the base rate of JobSeeker by at least $25 a day more than the old Newstart rate, so that people can cover the basics and rebuild their lives.”

The Services Australia website currently reads: "From 1 April 2021, your payment will change to the normal JobSeeker Payment rate for your situation".

For a single person with no children, their current $715.70 fortnightly rate would fall to $565.70 on April 1, after the $150 Coronavirus Supplement is withdrawn.

If ACOSS' recommendations were implemented, the rate would be $915.70 a fortnight, or about $200 less per fortnight than when the Coronavirus Supplement was at its peak in 2020.

The government's plans to reduce the unemployment rate to the previous Newstart level remain unchanged, with the Department of Social Services saying on multiple occasions the aim is to get more Australians back into work.

“As the labour market improves we want to encourage people to re-engage with the workforce because we know that even a few hours of work a week while on payment can have a dramatic impact on the pathway off income support," Social Services Minister Anne Ruston said in December.

See also: The Pros and Cons of the JobSeeker cuts

There is data to back the claim that more Australians are getting back into work.

Australia's unemployment rate fell to 6.8% in November from 7.0% in October, seasonally adjusted, with 100,000 jobs added, while job ads hit an 18-month high in December according to ANZ.

But the end of JobKeeper in March is seen as a key risk, potentially adding to already high unemployment: Treasurer Josh Frydenberg has ruled out extending the program. 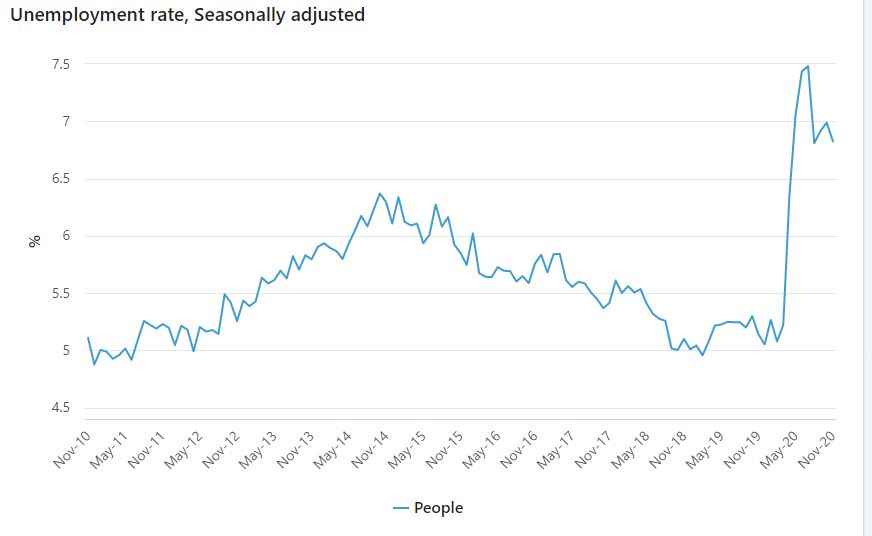 According to Roy Morgan employment data, which uses different criteria to the Australia Bureau of Statistics (ABS), Australia's unemployment rate actually increased in December to 12% of the workforce, or 1.72 million people.

The big difference between the two figures (6.8% vs 12%) is because according to Roy Morgan, the ABS counts a number of Australians who work zero hours for economic reasons as employed.

Under-employment (those working but looking for more) also increased, with Roy Morgan reporting an under-employment rate of 9.4% (1.36 million Australians).

In total 3.08 million Australians (21.4% of the workforce) were either unemployed or under-employed in December, an increase of 117,000 on November.

Roy Morgan CEO Michele Levine said while the economy is in recovery mode, there aren't enough jobs to go around.

“The results for December shows that as the Australian economy gradually re-opens – several border closures ended (at least temporarily) in the month – and as stimulus and support measures wind down there are many Australians keen to re-enter the workforce and find new employment," she said.

“However, since the COVID-19 pandemic began to heavily impact Australia in mid-March there are now an extra 900,000 Australians either unemployed or under-employed which will make for a very competitive jobs market for those currently looking for new work.”

Deloitte’s new business outlook report 'We Got This’, forecasts a 4.4% increase in GDP in 2021, but it warned of the risks of withdrawing income support during a time of high unemployment.

Economist and Deloitte Partner Chris Richardson had previously argued for a JobSeeker increase before COVID, said the government needed to be willing to "change course fast" on providing stimulus measures.

"Today’s job recovery isn’t one your parents would recognise. Past recessions left lengthy hangovers," he said.

"Yet although unemployment and underemployment will be much higher than they were pre-COVID, they’re also falling much faster than feared. That’s great.

"And don’t forget the long term benefits: you can see the impact of recessions for decades afterwards in the income and unemployment experiences of those who were young adults when the storm first hit.

"So the smaller the upfront pain, the less is the longer term scarring."

Ms Levine said there is likely to be a continuing high level of unemployment over the next few months as government stimulus winds down, but proper containment of the virus also leads to lower levels of unemployment.

“Looking at the states there is something to be said for the way New South Wales has handled the COVID-19 pandemic. Australia’s most populous state now has clearly the lowest unemployment at only 8.6% in December," she said.

“This measured approach of relying on excellent contact tracing and testing, and localised lockdowns such as in the Northern Beaches rather than blanket city-wide or state-wide lockdowns, has provided greater certainty to businesses that they will be allowed to continue operating without undue restrictions being imposed.

"The ending of stimulatory programs such as JobKeeper in the next few months is set to increase the economic (and employment) costs of lockdowns and border closures that other states have relied on heavily as part of their responses to COVID-19.”

Photo by Juliana Romão on Unsplash