The latest Roy Morgan Digital Payments Report shows 10.2% of Aussies use buy now, pay later platforms like Afterpay and Zip over a 12-month period, up 7.4% from this time last year.

Contactless mobile payment services like Google Pay and Apple Pay are now used by 9.8% of Australians, an increase from 6.8% a year prior.

Wearable payment devices like Garmin Pay are also on the up, although they represent a small share of the market.

The main wearable payment device is Fitbit Pay, used by 0.3% (up from 0.2%), while wearable devices in general are used by 0.4% of Australians.

“Afterpay, Apple Pay, and Google Pay are expending a great deal of effort to developing new options that appeal to consumers, and clearly it’s paying off for them,” Ms. Levine said.

“Introducing new technology to large cross-sections of society is never easy. Part of the challenge that digital payment companies face is making people aware of what exists.

"Taking buy-now-pay-later technology as an example, awareness of these services has grown from 41.5% of the population a year ago, to 55.5% today. This growth in awareness is the first step to higher rates of adoption.” 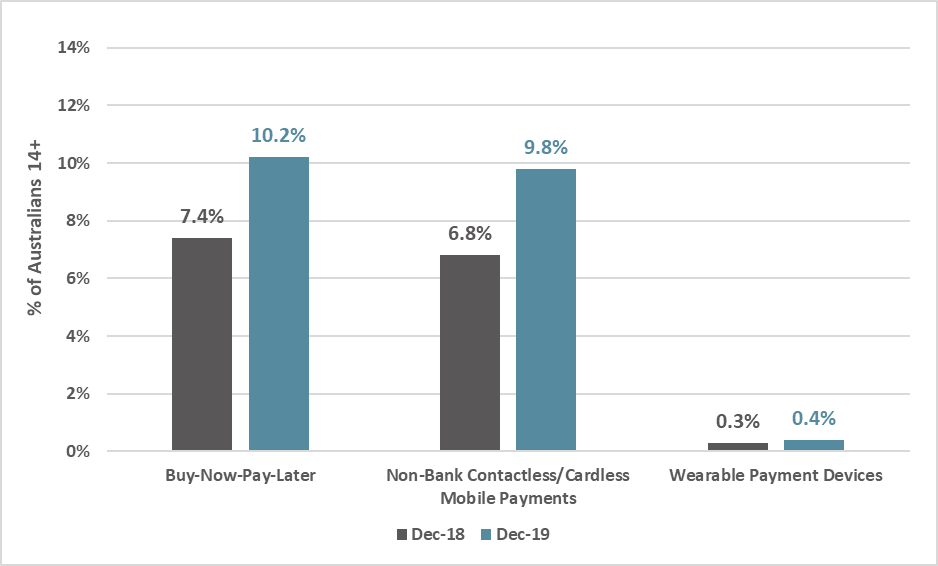 Roy Morgan tracks awareness and use of numerous digital payment services by conducting weekly interviews of more than 1,000 Australians.

Based on its data, older methods of payment are stagnating or falling in popularity altogether in the wake of newer methods' rapid growth.

The use of bill payment services has dropped to 56.3% of Australians from 58.8% a year ago, while the likes of  PayPal, Western Union and Masterpass are now only used by 40.5% of Australians, down from 43.8%.

Individual bank payment services, like Commbank Tap & Pay, are now only used by 4.4% of Australians, suggesting Australians prefer to use broader services like those from Apple or Google.

“Not so long ago payment systems such as BPay and PayPal were breaking new ground, but consumers are turning to technologies that promise even more convenience, especially those offered via the ubiquitous smartphone,”  Ms. Levine said.

Looking for a place to stash your cash? Below are savings accounts with some of the highest interest rates in the market.

Australians also seem to prefer using the convenience of a mobile banking app than visiting a branch, according to a new study from Roy Morgan titled the Satisfaction with Banking Channels Report.

Mobile banking (via a mobile or tablet app) proved to be the banking channel with the highest customer satisfaction, with an average rating among the big four banks of 89.6%.

Branch banking wasnt too far behind at 83.4% satisfaction, while phone banking (calling the bank directly) came in fourth at 77.4%.

“If we look at the four banking channels available to customers, we see that the two with the highest satisfaction ratings – mobile banking apps and internet banking – are also the two that are autonomous and don’t require any direct involvement from banking staff,"she said.

"The higher customer satisfaction ratings of the automated banking channels give an extra incentive to banks and other financial services firms to increasingly move as many of their services online as possible.

"The benefits to the banks of moving customers online include reduced labour costs associated with other banking channels and it’s easy to see the likely future: even greater technological integration and less interaction with staff."

Commbank was the strongest performer among the big four in terms of overall satisfaction.