Photo by Ben Blennerhassett on Unsplash

If you’ve been lying awake at night unable to sleep because you’re so stressed about money, you’re not alone.

Nearly 40% of Aussies are in the same boat, and more than 60% admit to regularly feeling ‘hot’ and ‘stressed’ about their bank accounts, according to research by online financial services company Spaceship.

Spaceship’s Fear of Finding Out Survey asked 1,001 Australians how they feel about their finances, and the results were alarming.

Nearly seven million of us can’t sleep at night because of financial concerns, and it’s likely to get worse as we head into one of the most expensive periods of the year – Christmas.

Spaceship CEO Andrew Moore said a combination of rising debts, an inability to control personal spending and fears about the global economy were likely to blame.

“Increasingly Australians are becoming more and more anxious about their finances, at a time when this generation is wealthier than any that has gone before it,” Mr Moore said.

“We call it FOFO, or Fear of Finding Out your bank balance.”

The research found the most stressed group of Australians were aged between 35 and 54.

“This is the group who generally face peak mortgage debt after upsizing to accommodate a growing family and is the cohort juggling career and raising families.”

A recent survey by QSuper found that Baby Boomers (those aged between 55 and 73) were the least stressed about money.

According to the Australian Bureau of Statistics (ABS), personal debt in Australia has risen to $250,000 per household. Based on a median annual gross household income of $88,452, the average Australian household now owes triple their annual income in debt.

Australian household debt is now the fourth highest in the world, and twice as high as the United States, according to the Organisation for Economic Co-operation and Development (OECD).

New South Wales is the most financially anxious state, with 22% of the population frequently worried about money matters. This compares with 0% of Canberrans, suggesting we may have something to learn from the habits of our conservative public servants. 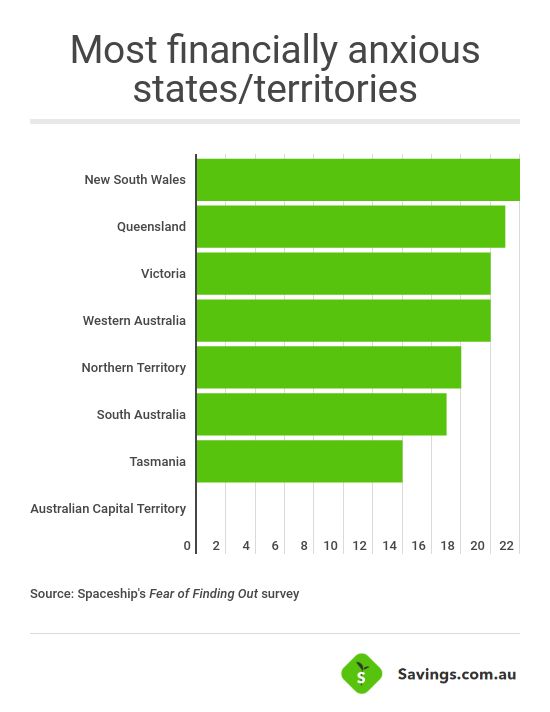 “Australian’s top financial regret is failing to budget, which demonstrates the importance of keeping it simple when it comes to managing your financial affairs,” Mr Moore said.

“More worrying though is the fact that Australians’ second-biggest financial regret is receiving poor advice, followed by getting a credit card.”

Mr Moore said FOFO could lead to irrational spending, with over 70% of Australians admitting to spending money on things they don’t need, or on purchases they’ve since forgotten about.

“More than 55% of Australians admit to never being taught how to manage their finances.

“The good news is, you no longer need to wait for anyone to teach you. Thanks to technology, there are so many ways you can now teach yourself. Most Australians are not using a simple budgeting app. Embracing free financial education online should be the first port of call.”

The survey found that women are more anxious than men about their finances, with 42% of women losing sleep compared with 35% of men.

Over half (62%) of Australians feel financially anxious, while a third admit to feeling embarrassed about their spending habits.

The research also found trust within relationships could be a growing problem, with 38% saying they don’t feel comfortable talking about finances with their partner, while one third (33%) of Aussies refuse to share a bank account with their partner.