Consumer confidence gets a post-budget bounce Australians are feeling a little more confident after last week's Federal Budget, and they're keen to get out and spend.

According to ANZ-Roy Morgan's data, consumer confidence increased 0.8% last week, due to both the warm response to the Federal Budget (the most well-received in more than a decade) and a lack of local coronavirus cases.

"Consumer confidence increased by 0.8%, with sentiment in Sydney jumping 5.4% as no new community cases of COVID-19 were reported," ANZ Head of Australian Economics David Plank said.

"The greater than expected spending promised by the government in the federal budget may have also provided a boost to confidence.

"Among the detail, 45% of the responders said it is a ‘good time to buy a major household item’ versus 22% for it being a ‘bad time to buy’, which are respectively the highest and lowest values since February 2020."

These numbers are much higher compared to 12-months prior, when confidence and future expectations plunged to near-record lows at the beginning of the COVID crisis.

ANZ's weekly data meanwhile found the four-week moving average was as low as 84.2 at this point in 2020. 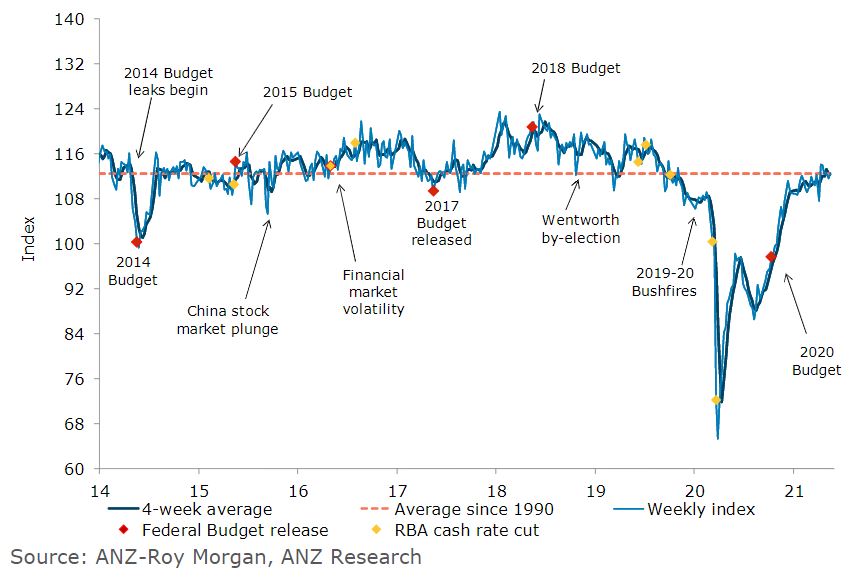 A year on from April 2020's lockdown-induced lows, spending intentions across all seven categories tracked by Commonwealth Bank (CBA) showed "strong improvement, in a sign the economy advanced its recovery in April".

“This comes as no surprise as we know that April 2020 was the low-point for spending as the first wave of Covid-19 restrictions hit Australians,” said CBA Chief Economist Stephen Halmarick.

“A year later, the economy has recovered strongly from Covid-19 impacts, with employment above pre-pandemic levels and household spending intentions on the rise as consumers once again feel confident about their economic prospects."

Travel spending intentions "skyrocketed" compared to 12 months ago when almost all travel was halted, while entertainment spending in particular was also much higher at bars and pubs, restaurants, movie theatres, and live theatre.

According to Mr Halmarick, the increase in spending intentions across all of these was reflected in last week's budget.

“We expect the residential property market to be a key source of support for Australia’s economy in 2021, driven largely by the very low level of interest rates."

Photo by krakenimages on Unsplash

Working from home is 'likely' to outstay lockdown orders

Millions of age pensioners set to benefit from payment rise