Home / Compare Savings Accounts / Most JobSeeker, JobKeeper payments being spent on the essentials

Most JobSeeker, JobKeeper payments being spent on the essentials Australians receiving coronavirus stimulus payments spent most of it on household essentials, a new survey shows.

The latest Australian Bureau of Statistics (ABS) household impacts survey found paying household bills was the most common use of the JobSeeker Coronavirus Supplement (67%) and the JobKeeper Payment (78%).

According to the ABS' data, one in 11 Australians (9%) reported receiving the JobSeeker payment in November - other data shows there is around 1.5 million still on the payment.

Of these Australians, paying household bills was the most commonly reported use at 67%, followed by purchasing household supplies like groceries (63.3%), and paying mortgages and rent (38.9%).

Other popular uses of the JobSeeker stimulus included paying for medical services (26.1%), saving it (26.3%) and paying down credit card and personal debt (19.1%).

The latter two are supported by other data: Australia's household savings ratio skyrocketed to 19.8% in June off the back of JobKeeper and increased JobSeeker, while recent Reserve Bank data showed Australians reduced their overall credit card debt by almost 24% nationally since March.

According to the data, only 14.9% reported using their JobSeeker payment on discretionary items like clothing and footwear and 17.5% on recreational activities.

When asked what their main use of the supplement was, 31% reported mainly using the payment on household bills and 26% said household supplies and groceries.

The JobSeeker coronavirus supplement is currently $250 per week, and is decreasing to $150 in January before reverting to the old Newstart rate in April.

[Comment: Just how much should JobSeeker be increased by?]

Queensland has the most JobSeekers

When broken down by state, the sunshine state was also the JobSeeker state, with JobSeeker recipients accounting for 12% of all people living in Queensland.

One in ten (10%) Victorians and South Australians were on JobSeeker, while this figure was 8% for Western Australia.

In New South Wales, Tasmania, Northern Territory and Australian Capital Territory, JobSeeker recipients made up only 6% of the population.

The JobKeeper payment meanwhile, introduced to keep people employed and businesses open through shutdowns, was also widely used and successful.

As many as 14% of Australians were on JobKeeper in September, while the latest November data shows one in 17 (6%) are still getting it from their employer.

Paying household bills (78%) was the most commonly reported use of the JobKeeper Payment, followed by household supplies (groceries) at 63% and mortgage or rent payments (54%).

A higher portion of JobKeeper recipients used their stimulus cheques to pay off debts compared to JobSeekers, with 24% reporting doing so. 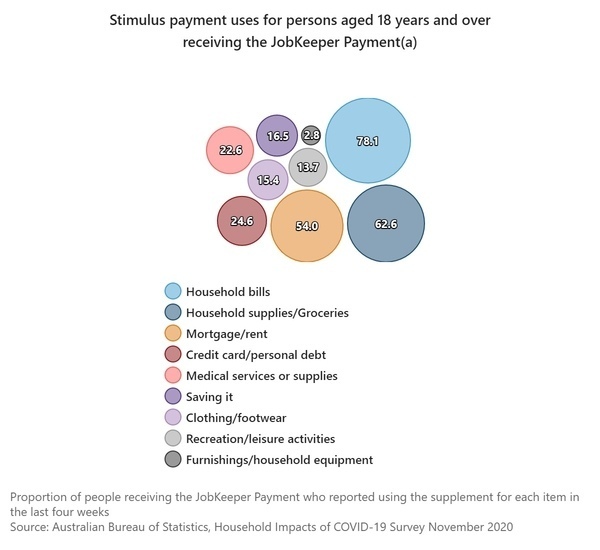 Almost a third (31%) of JobKeeper recipients mainly used the subsidy for household bills (when asked to pick their biggest expenditure), and 26% used it for household supplies.

JobKeeper vs JobSeeker: What were stimulus payments used on?

The proportion of people receiving the Coronavirus Supplement who reported using the payment for each item in the last four weeks. Source: ABS.

Incomes not higher for those on JobKeeper

Most people reported lower incomes while on JobKeeper, with 72% (nearly three-quarters) saying so.

One in five (20%) reported the same or similar incomes, while only 9% received more income than usual.

Economic modelling undertaken for the Australian Housing and Urban Research Institute (AHURI) in November found the combined JobKeeper and JobSeeker payments spared half a million households from housing affordability stress.