Despite COVID job losses impacting women most, the federal government's proposed income tax cuts will benefit rich men twice as much as women.

With Treasurer Josh Frydenberg considering fast-tracking the next round of income tax cuts in a bid to help the economy recover from the COVID-led recession, new modelling from The Australian Institute (TAI) reveals that bringing forward stage two of income tax cuts would deliver up to $2.28 in benefits for men for every $1 that flowed to women.

This is despite a larger proportion of women losing their jobs than men during the COVID crisis.

Total employment in March and April fell 3.9% for men and 5.3% for women according to TAI. Women also lost hours of work faster than men, with hours worked by women falling 11.5% and 7.5% for men.

Just 4% of the benefit would flow through to the lower half of all income earners.

On Wednesday, the think-tank followed up with new modelling that showed rich men would benefit twice as much as women if the tax cuts were brought forward.

"Despite women facing a bigger impact from the recession, the Government’s response has seemingly ignored them. The Government removed JobKeeper from early childhood workers, an industry dominated by women," Grudnoff said.

"At the same time, they have chosen to stimulate male dominated industries, like the construction, through the HomeBuilder scheme. Bringing forward tax cuts that mostly go to men is just another policy that will advantage men, while women are again left behind.

"Giving tax cuts to the wealthy will have a very limited stimulatory effect on the broader economy, but it will significantly widen the economic divide that already exists between men and women in this country."

The government has hinted at bringing forward income tax cuts to stimulate the economy by increasing household spending, and revealed any announcements on this will be made when the budget is handed down on October 6.

Previous TAI modelling revealed the benefits of bringing forward stage two to 2021-22 would mainly flow to high income taxpayers, with the top 10% of income earners receiving over 50% of the benefit while the top 20% receive over 91%.

According to the new modelling released on Wednesday, men would receive 70% of the tax cut while women would only receive 30%.

The report says the reason men in the top end of income earners receive more of the benefit is that "there are far more men on high incomes than women". 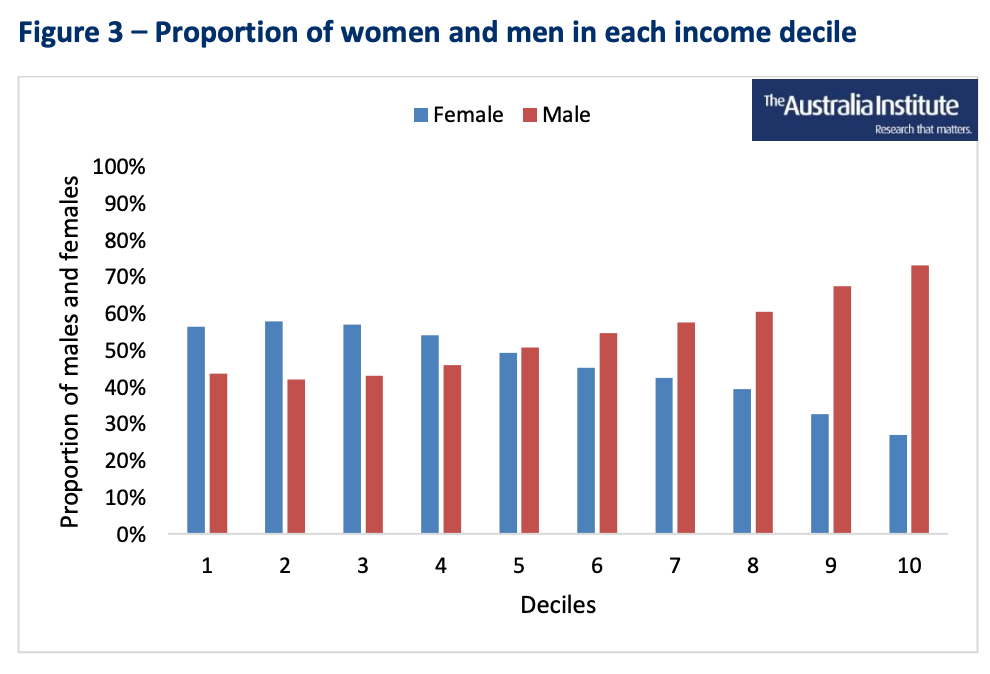 The report shows an almost identical gender disparity if stage three of income tax cuts were brought forward to 2021-22.

"This would not only make the stimulus more efficient, in that more jobs would be created for a given amount of money, but it could also benefit women," Grudnoff said.

"Stimulus targeted at the unemployed would be better targeted at those most impacted by the recession. Rather than reducing unemployment benefits, as the Government is currently planning to do at the end of September, the Government could instead increase the coronavirus supplement.