A bonus savings rate of only 0.05%? RAMS cuts again by 40 basis points Once the darling of savings accounts, RAMS has cut its Saver bonus interest rate once again, this time by a large amount.

In a note sent to customers, RAMS said it would be cutting the bonus interest rate on its RAMS Saver by 40 basis points, to just 0.05% p.a.

To earn that 0.05% in bonus interest, customers have to deposit at least $200 each month and make no withdrawals.

This is the latest in a string of savings account rate changes made by RAMS, which just a couple of years ago boasted one of the highest total interest rates on the market at 3.00% p.a.

As the image below shows, it had this rate as recently as 2019.

To be clear, RAMS is not the only bank to cut savings account interest rates recently, especially when five cash rate reductions have been made by the Reserve Bank since mid-2019.

But based on Savings.com.au's research, no other bank has cut quite so drastically, as other previous market-leading savings account rates offered by the likes of ING and UBank remain above the 1.00% p.a mark.

For accounts with select conditions, like Westpac's Life account for under 30's, rates as high as 3.00% p.a can be found.

RAMS and Westpac have been contacted for comment on this large change. 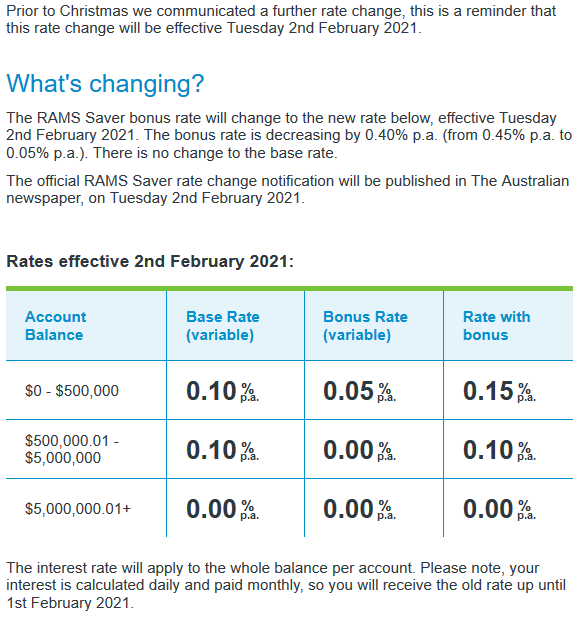 Three of the four big banks - Westpac, NAB, and CBA - have lowered their own savings account rates so far in 2021, albeit not by the same margin.

Westpac, which owns RAMS, made some 15 basis point cuts to its accounts, including the Westpac life account, which now has a maximum interest rate of just 0.40% p.a for customers over 30 (0.20% base rate + 0.20% conditional bonus rate).

Commonwealth Bank meanwhile lowered savings rates by just 5 basis points, although with rates already so low it barely has room to move.

The GoalSaver account (CBA's non-introductory account) has a total interest rate of 0.45% p.a, with 0.40% p.a tied up in the bonus rate.

In other, bigger savings account news, neobank 86 400 was purchased by NAB, while Xinja has handed back its banking license and returned all deposits to customers.