What influences fuel prices in Australia? Photo by Frankie Dixon on Unsplash

While it can be easy to blame some oil baron for high petrol prices, there’s actually lots going on behind the scenes affecting how much you pay for your car’s go-go juice.

Oil prices, distribution channels and fuel cycles all sound confusing, and your eyes might even glaze over when thinking about them. But it’s important to know what’s going on behind the scenes, as it can affect the end price you pay at the fuel bowser.

What affects fuel prices in Australia?

There are many factors that can influence the price of petrol here - but arguably the main two are: where it’s drilled from, and where it passes through. Australia’s fuel prices are largely at the mercy of Tapis Crude oil prices, and Singapore’s ‘Mogas 95’ refined oil market.

Need to finance a more fuel-efficient vehicle? The table below highlights a handful of low-rate fixed loans for new cars in the market.

Base criteria: fixed and secured car loans for 'low emission' cars. Rates based on a loan of $30,000 for a five-year loan term. Products sorted by advertised rate. Repayments are calculated based on advertised rates. *The Comparison rate is based on a $30,000 loan over 5 years. Warning: this comparison rate is true only for this example and may not include all fees and charges. Different terms, fees or other loan amounts might result in a different comparison rate. Rates correct as of May 24, 2022. View disclaimer.

Tapis Crude and how it affects petrol prices

Tapis Crude is a Malaysian crude oil and is used as a pricing benchmark in Singapore. It is drilled primarily from the South China Sea - so you can see why that area is valuable geopolitically. ExxonMobil has a 30% stake in the drilling site.

In Singapore, Tapis Crude is then refined into what is called ‘Singapore Mogas 95’, which is what we primarily use in Australia. The Australian Competition and Consumer Commission (ACCC) says this is the largest component of the retail price, accounting for 50% of what you pay at the bowser.

Tapis Crude is commonly some of the more expensive oil on the market. The relative proximity of Tapis' drilling fields to Australia means wholesalers here favour it over waiting and paying for shipments of other oil types such as Brent, WTI or OPEC oils (more on that below). 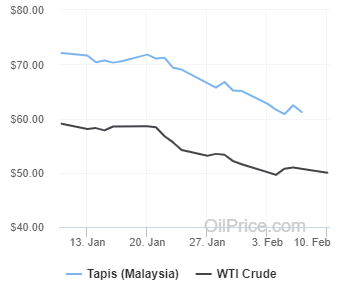 Crude oil is the main ingredient in unleaded petrol, and is traded in and priced by ‘the barrel’. A barrel is 42 US gallons, or about 159 litres. Oil is commonly traded like other commodities, both as a physical entity and as futures contracts.

There are more than 40 crude oil types out there, with oil fields anywhere from the US, the UK, Canada, Saudi Arabia, Nigeria and elsewhere. We also produce oil in Australia, but not enough to fuel our demand, so we often have to look abroad.

Together, these companies set a benchmark price by controlling supply, as oil is a non-renewable resource, and competing companies would result in more oil drilling. Geopolitical events can also affect prices - in 2008 for example, Venezuela cut off oil sales to ExxonMobil over legal battles, sending OPEC prices upwards. War and the destruction of oil fields can also cause volatility in the markets. There’s a lot going on that can affect oil prices, and while events in a far-flung country can seem distant, they could affect your hip pocket sooner or later through higher petrol prices.

This chart from MacroTrends highlights the Brent Crude prices over the last ten years. You’ll note prices dipped in 2014 due to OPEC greatly increasing supply of their oil to exceed demand and exploration in the US and Canada proving successful through fracking oil.

According to the ACCC, taxes make up 38% of the retail price of petrol, consisting of excises and GST. The excise for petrol, from February 3 2020, is 42.3c per litre and is raised every six months or so. Although fuel in Australia is essentially double-taxed (GST and excise), the ACCC says Australian prices are among the lowest in advanced economies.

Oil barrels are also quoted in US Dollars, so the AUD to USD exchange rate can influence the end price. Other factors that contribute to the retail price include profit margins and costs from refining, wholesaling, distributing, and shipping costs. Take a look at this chart comparing Australia's fuel taxes to other nations below:

What about other fuel types?

This article so far has been petrol-heavy, but diesel and LPG are subject to market pricing as well. The main markets that affect pricing in Australia are, according to the ACCC:

These markets can operate similarly to the crude oil markets. Prices are determined once a month and are also traded in US Dollars, meaning similar economic conditions can affect prices, too. All this talk about crude oil may have you nodding off, but another factor into the price you pay is fuel cycles, as explained below.

The five largest capital cities are each subject to fuel cycles of troughs and peaks, and are the result of deliberate pricing policies of retailers, rather than wholesale costs. Cycles have been anywhere from 14 days to a massive 54 days. The ACCC has a useful tool to help determine when the best time to fill up is.

What about regional Australia?

Canberra, Hobart and Darwin feature much more stable fuel cycles, with not so drastic peaks and troughs. This is because there is a smaller market in each city. In the five other capitals, there are times in the cycle where the petrol price falls below the supply price (consisting of wholesale costs, federal taxes and freight). Other areas in Australia don’t have this fuel cycling ‘luxury’.

While looking too deeply into world affairs and economics can be mind-numbingly boring, they can provide insight as to why your wallet feels lighter every time you fill-up the car. As you’d probably expect, conflict, wars, trade sanctions and other drama can affect how much we pay at the pump.

However, what you might not know is how at the mercy Australia is to one particular market - Singapore’s Mogas 95 and its use of Tapis Crude oil, which is some of the more expensive oil on the market. This may not help you sleep better at night, but what you can arm yourself with is when the fuel cycle is in a trough in your city/state.

Avoiding the peaks and buying in the troughs could potentially save you a fair chunk of money in the long term.