Photo by David Clarke on Unsplash

Frugal Aussies are making the tough choices and putting their tax cuts towards housing, insurance and food rather than splashing it on luxury items like travel and cars.

New research from CommSec reveals Australians are tightening their belts and are travelling less, buying fewer cars, spending more on insurance, and winning the battle on high electricity and gas bills.

But we are spending more money on public transport and Uber, which CommSec Chief Economist Craig James says could be reflective of the dismal new car sales figures.

"Perhaps part of the cutback on car purchase reflects a switching to taxis, Uber, public transport and ride-sharing services as spending on transport services rose by $3.35 a week over the past year," Mr James said.

Household incomes saw a spike in the September quarter due to the tax cuts being paid, with consumers promptly pocketing most of it.

"Many families needed to, because up to then, many families were running down savings so they could maintain spending. The question is whether the 'saving' was just a strategic decision, awaiting the early sales events in November and early December." 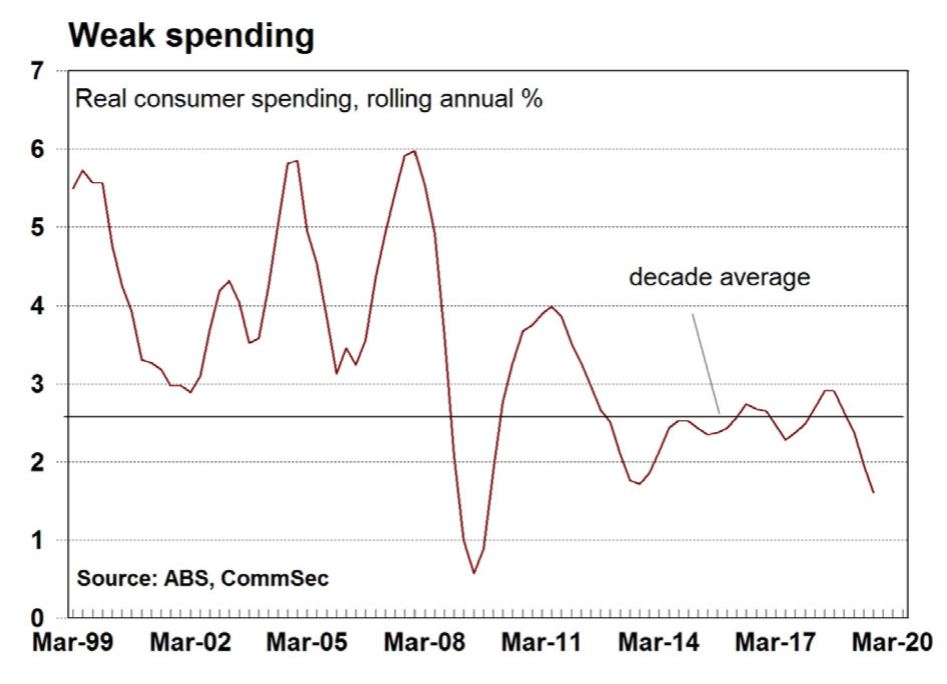 Last week, data from CommBank revealed Aussie shoppers spent up big in the Black Friday/Cyber Monday sales, with retail expenditure up 87% on Black Friday compared with the average spend in the three weeks prior.

Mr James said most Aussies saved their tax cuts, albeit initially for some.

"Consumers have welcomed the tax cuts and interest rate cuts as the measures have allowed people to rebuild savings without sacrificing their standard of living in a significant way.

"Aussies have saved, not spent, the tax cuts - at least so far. Anecdotal evidence suggests that some of the dollars were spent at recent sales events."

Over the year to September, the average family spent an extra $38 a week compared with a year earlier, while income rose by almost $62 a week.

"For the full 12 months to September, disposable income for the average Aussie family rose by around $39 a week, and most of that was spent. Saving was actually cut back by just over $2 a week so people could maintain their existing spending," Mr James said.

"Add in the total spending on health (an extra $5.58 a week) and it is clear that these areas hardly fill consumers with joy. Thus the low levels of consumer confidence."

"Due to lower prices, Aussies were able to cut back on spending of mobiles and other telco devices. The slowdown in home building saw Aussie families spend less on fridges, washing machines and things like furniture and carpets. And the savings in these areas allowed people to channel spending in other areas," Mr James said.

Australians also cut back on gambling, newspapers and books, but spent more on alcohol, clothes and shoes.

The average Australian household is spending less money on their electricity and gas bills, down by $1.30 a week.

"The good news is that the pressure on electricity and gas retailers is working, with prices falling 1% over the past year. In addition, we are turning off lights and using appliances less with energy usage down by 0.6% over the year," Mr James said.

Power prices are forecast to fall even further thanks to increasing supplies of renewable energy generation, according to official forecasts published by the Australian Energy Market Commission (AEMC).

The AEMC predicts electricity prices will fall in all states and territories, with the exception of the Northern Territory and Western Australia. 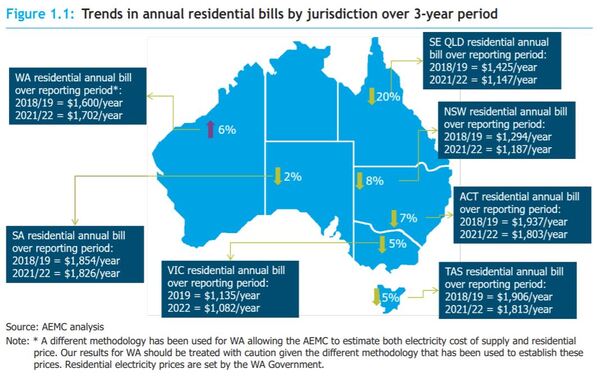 South-East Queensland energy users will see the biggest benefits, with energy prices dropping by as much as 20% by June 2022 - a saving of $278 on the annual bill.

It's not good news for those living in Western Australia, where electricity prices are tipped to rise by 6%, or $102 a year by 2022 due to increased gas costs.

There wasn't enough data for the AEMC to forecast price changes for the Northern Territory.