Record number of digital wallet transactions made in March 2020 Australians are turning to digital wallets in record numbers to buy things during the COVID-19 panic.

The latest analysis from the Commonwealth Bank found digital wallet users - aka platforms like Apple Pay, Google Pay and Samsung Pay, among others - made a record number of transactions in March 2020, and spent $1 billion in doing so.

The total number of digital wallet transactions also rose at a faster rate than previous months: According to CBA's data, the number of transactions made in March grew 8% from February compared to the 4.4% compound average monthly growth rate.

According to CBA's Executive General Manager of Everyday Banking Kate Crous, coronavirus did impact these results.

“The growth in the number of contactless purchases has been increasing since the introduction of Apple Pay last year, however it’s now evident that even more people regard it as a safe and secure way to pay in this environment," Ms Crous said.

Digital wallets are much more hygienic than a standard debit or credit card and on a different level altogether than cash, as no physical version of a card is used.

Digital wallet services let people make payments at merchant terminals with a simple tap of their phone, as the phone securely stores the card's details and utilises the phone's Near-Field Communication (NFC) chip to connect to POS terminals the same way the physical card would.

The growth in digital wallet figures also follows a recent announcement from the Australian Payments Network (AusPayNet) stating the PIN limit for contactless card payments will be temporarily increased from $100 to $200 to reduce the need for people to make contact with merchant terminals.

Ms Crous said paying without cash is an important way to protect yourself from the spread of the virus.

"The increased contactless card limit is a fantastic step, however where possible we’re encouraging our customers to use digital wallets as they have the added safety of not needing to enter a PIN on the PIN Pad no matter how much they spend, as it instead leverages touch ID or Face ID," she added.

The data also found 77% of digital wallet spend in March was on a debit card, although credit card spend grew by 21% compared to 16% for debit cards. 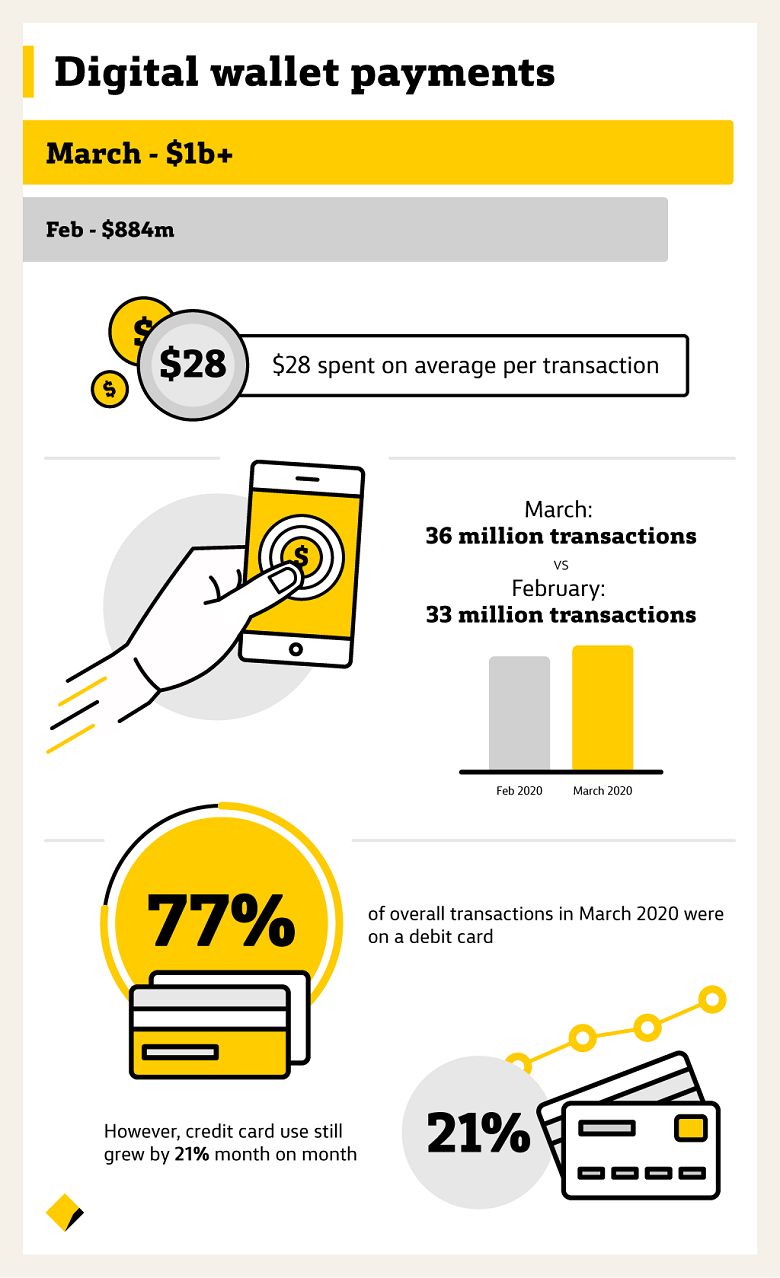 Do the big banks all use digital wallets?

The one sort-of exception to this is Westpac, which was the last bank to announce it would allow the use of Apple Pay: It plans to roll out Apple Pay by June 2020, with subsidiary brands  St George, BankSA and Bank of Melbourne already having it available.

If you want to sign up to use a digital wallet, you can check our articles on  Apple Pay, Google Pay and Samsung Pay to see if your bank allows them. There are also digital watch payment options available, such as FitBit Pay and Garmin Pay.