ANZ forecasts house prices in capital cities will spike 17% this year off the back of low interest rates and relaxed lending standards.

Perth and Sydney are forecast to be the best performers, with house prices increasing by 19% in each followed by Hobart at 18%.

Brisbane and Melbourne aren't far behind with a forecast of 16% price increases, followed by Adelaide (13%).

Only four months ago ANZ forecast house prices would increase by 9% in 2021, and ANZ senior economist Felicity Emmet said the revised forecast came off the back of low supply and extremely high demand.

"The strength in sentiment is putting upward pressure on prices, with low stock levels adding to the fear of missing out (FOMO) sentiment emerging in the market.gains of around 17% across the capital cities (up from 9% previously) in 2021," Ms Emmet said.

"With interest rates the primary driver of price gains, we see strength across all capital city markets." 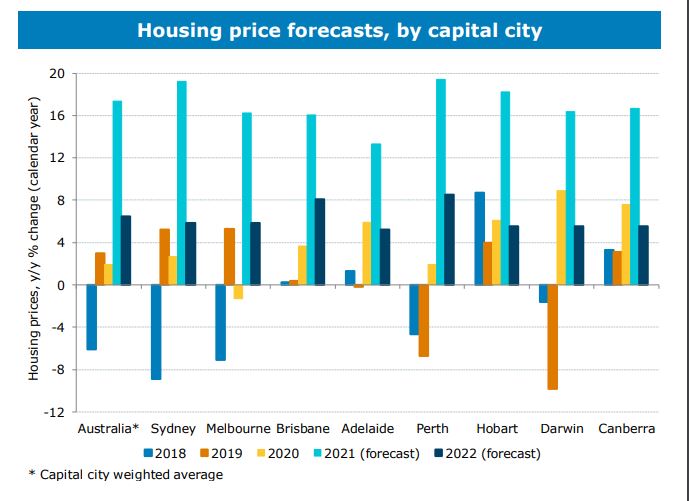 Ms Emmet said price gains were likely to slow in the second half of this year, but the Australian Prudential Regulation Authority (APRA) would still need to take action to stem the boom.

"By June we expect prices to be rising at a more moderate pace given the end of government programs like JobKeeper and HomeBuilder, and a lift in fixed mortgage rates," she said.

"By year end though, we expect the regulators will step in with macroprudential controls to address the overheating market, with the exact measures likely to be dependent on how the market develops over the next six months or so."

Many lenders have taken the knife to fixed-rates instead of variable rates since the Reserve Bank's (RBA) most recent cash rate cut, and many are now offering their lowest ever.

But with the end of the RBA's Term Funding Facility and increases in interest costs, Ms Emmet said fixed rates were likely to rise in the second half of the year.

"Over the past six months, more than 30% of new loans have been at fixed rates. While we don’t have data on the tenor of these loans, it’s safe to assume that a large proportion will begin rolling off from May 2023," she said.

"By then, fixed rates are likely to be significantly higher and variable rates will also likely be higher given higher funding costs for the banks.

"So, even without a lift in the cash rate, the housing market will face higher rates as early as H2 2021, with a more significant tightening in 2023."

The forecast house price gains are likely to decrease affordability at a time when first-home buyers are taking on a record-amount of debt.

The average first-home buyer loan size has approximately doubled between March 2004 and February 2021.

Ms Emmet said some people's homeownership dreams may not be realised this year as a result of the price boom.

"Strong price gains will lock some aspiring homeowners out of the market. Deposit affordability remains a key element of housing affordability." 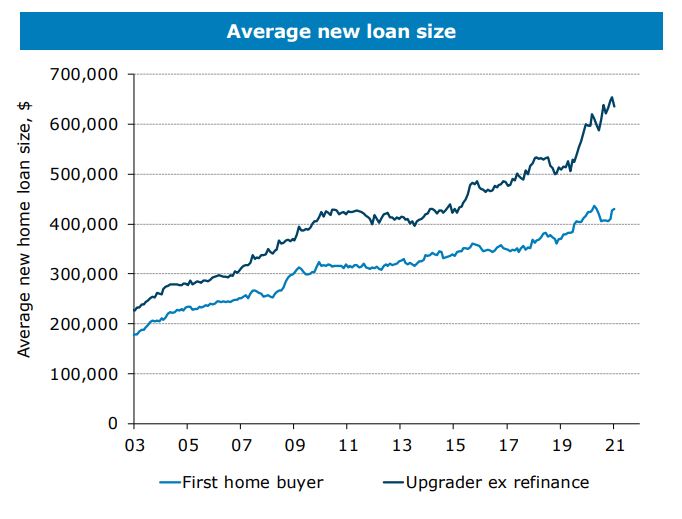