Rental vacancy rates have held at a 1.6% for a third consecutive month, but some lockdown-affected cities are starting to see rates climb.

The national rental vacancy rate has held at 1.6% in August, which is a 'multi-year low' according to Domain's latest report.

The report indicated that the strong performance of the rental market in all capital cities, excluding Sydney and Melbourne, means tenants are currently operating in a 'landlord's market'.

This could see continued upwards pressure on rental prices.

This has been evident in Melbourne, Brisbane, Canberra, and Darwin, where the rental vacancy rate has started to climb.

However, Sydney's vacancy rate has remained 'stable' in its ongoing lockdown, which the report says could be a sign that landlords are selling for strong capital gains. 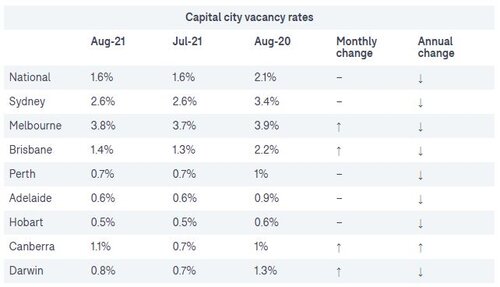 See Also: Is the 'Airbnb effect' pushing tenants out of holiday locations such as Byron Bay?

Sydney's rental vacancy rates have remained 'steady' at 2.6% since June, which proves the current lockdown is having 'little effect', according to the report.

Domain points to affordability constraints of buying in Sydney causing tenants to rent for longer, and rising prices that may have led to reduced rental stock, as two reasons for the low vacancy rate.

However, the report says that extended lockdowns could put upwards pressure on the vacancy rate, as tenants impacted by lockdown struggle to pay rent.

The report named a few suburbs in which vacancy rates have dropped most substantially.

This could signal tightening rental conditions for Sydney and Adelaide tenants.

The supply for vacant rentals was shrinking in the four months leading up to the latest Melbourne lockdown.

However, the rental vacancy rate has lifted from 3.6% in June to 3.8% in August.

Domain's report stated that it was clear the current lockdown will be a 'significant barrier' to overcoming rental vacancies in Melbourne.

This is because tenants have the ability to negotiate cheaper rents.

The report named a few suburbs in which vacancy rates have had the biggest lift.

Image by Philipp Berndt on Unsplash