For the first time in 17 months, Sydney has recorded a decline in housing values with peak property price growth said to be behind us.

CoreLogic’s Director of Research Tim Lawless said every capital city and broad ‘rest of state’ region is now recording a slowing trend in value growth, albeit with significant diversity.

"Sydney and Melbourne have shown the sharpest slowdown with Sydney posting the first decline in housing values since September 2020 - -0.1% - while Melbourne housing values were unchanged over the month following similar results in December - -0.1% - and January, +0.2%,” Mr Lawless said. 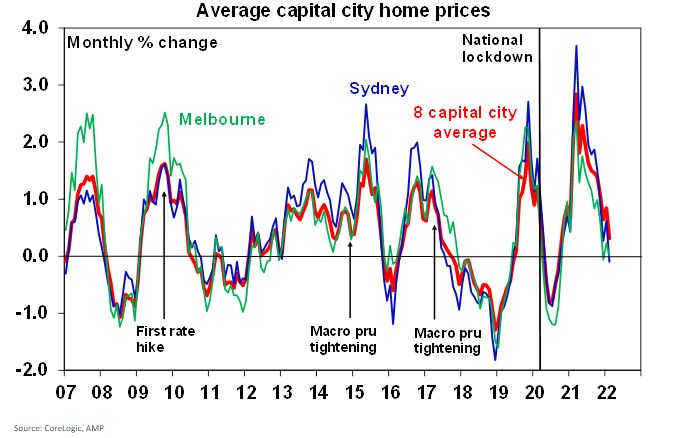 AMP Chief Economist Shane Oliver said this peak is reflecting the combination of poor affordability, rising mortgage rates, and the RBA likely to start hiking rates by August but possibly as early as June.

Mr Oliver said rising supply in Sydney and Melbourne is due to vendors seeking to take advantage of high prices.

"Peak property price growth is now well behind us and national average property prices are likely to peak in the next six months and then fall into 2023," Mr Oliver said.

"The property slowdown is occurring earlier relative to the timing of RBA rate hikes this cycle because of the bigger role ultra-low fixed rate mortgage lending played this time around in driving the boom.

"Normally fixed rate lending was around 15% of new home lending but over the last 18 months or so it was around 40 to 50% as borrowers took advantage of sub-2% fixed mortgage rates.

"However, fixed rates have now been rising since the June quarter last year which has been taking the edge of new home buyer demand."

Just last month one of Australia's largest bank's in ANZ, increased fixed home loan rates twice, by up to a total of 104 basis points.

Read more: How interest rates compare to a year ago

Despite a plateau across the nation, CoreLogic's report detailed regional Australia continues to record a substantially higher rate of growth than capital cities.

However, CoreLogic notes across the regions conditions have eased from a recent peak of 6.4% over the December quarter and remains down from a cyclical peak of 6.6% recorded in April last year.

What's next for Australian property?

RBA rate rises are weighing on Australian economists' property forecasts for the next couple years.

Mr Oliver said the 30 year declining trend in mortgage rates which has enabled new buyers to borrow progressively and hence pay more and more for property is now likely over.

He also said the work from home phenomenon may take some pressure off capital city prices.

CommBank's Head of Australian Economics Gareth Aird said they expect the RBA to exhibit greater awareness of the focus between changes in interest rates and the impact on home prices, household behaviour and the broader economy.

"The economy is not static, rising interest rates will generate changes in behaviour, which in turn will impact economic outcomes," Mr Aird said.

"We expect an orderly correction in dwelling prices of 8% in 2023, with prices forecast to end 2023 a little lower given we are looking for a flat outcome nationally now in 2022."

Westpac Senior Economist Matthew Hassan said the slowing of the property market at current remains gentle to date and is coming against a backdrop of very high turnover.

"Consistent with affordability becoming a more binding constraint in many markets, we expect to see a more pronounced cooling as the year unfolds and an eventual shift into correction as official rate hikes come through from August," Mr Hassan said.