Home / News / With interest rates rising, is it time to fix your home loan?

With interest rates rising, is it time to fix your home loan? Last year, Australian home buyers saw some of the lowest and most competitive fixed mortgage rates ever, but this is slowly changing.

This year fixed home loan rates have generally trickled back up with the major banks increasing first and a range of smaller banks and institutions following in-kind.

Two movements seem to have triggered the latest flurry of increases - APRA's serviceability buffer bump, and the Reserve Bank dropping its 2024 guidance on a cash rate rise, explained further here.

Home loan rate increases have been primarily on fixed rates, with variable rates either cut or left untouched.

As a result, the pendulum could be swinging back to variable rate home loans - fixed loans now also make up a lesser proportion of the market than just a few months ago, with market share declining by 1.5 percentage points from July to September.

"Fixed mortgage rates have been rising for some months and are set to rise further. Two and three-year market rates have risen significantly, as markets factor in stronger-than-expected economic and inflation data ... suggesting fixed mortgage rates are likely to rise quite quickly over coming months," Ms Emmett said.

"It’s true that variable rates have been edging lower over recent weeks, but the lowest mortgage rate available to new borrowers is set to lift around 50 basis points over coming months."

"For those investors that have not already fixed rates this will mean in the first instance a sharp reduction in free cash flow," Mr Breuer said.

"With interest rates starting so low, even a small increase in rates is a very large percentage impost – for example an increase of 0.5% from a base of 2.0% represents a 25% increase in interest cost.

"This will put pressure on the cash flow resources of many landlords and will focus their minds on maximising rental flows and reduction in costs such as insurance, repairs and agents' fees." 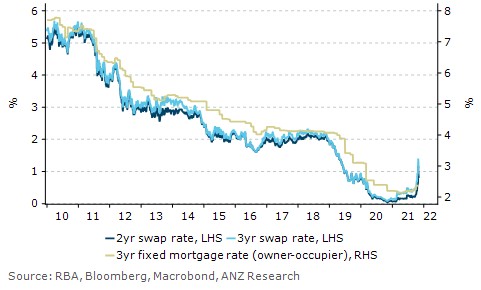 Head of lending at non-bank lender WLTH, Catherine Mapusua, said even with interest rates rising, borrowers need to make sure a fixed-rate loan is right for them.

"[Lenders] can restrict additional repayments and may charge break fees if there is a change in your circumstances," Ms Mapusua said.

"If you change banks, sell the property, or need to break the rate of your repayments, you risk charges that can be from a couple of hundred to several thousand.

"For people with a variable-rate mortgage, you may want to think about fixing part of your interest rate sooner rather than later to ensure you can continue to make payments.

"If you have a fixed-term interest rate, consider paying a lock fee. This can help secure your fixed rate on offer at the time of settlement, protecting you from rate increases before the loan is advanced.

"Given the speed at which rates rise and the challenge in predicting the climb, speak to your provider to guide you through a 'stress test' to determine what your future financial position looks like."

What could rising interest rates mean for property prices?

With APRA's serviceability buffer bump anticipated to reduce borrowing capacity by 5% - and in some cases much more - and interest rates trickling upwards, Mr Breuer said there could be a pullback in home prices.

"Historically, there has been an inverse relationship between interest rates and property prices. There is not much you can do about this other than sell the property if you have the conviction to do so," he said.

"However the most important thing is to make the investment work in terms of cash flow."

CoreLogic data released last week shows house prices continued to trickle up 1.5% in October, nationally up 21.58% in the past 12 months.

"Lower borrowing capacity and a slower pace of house price gains is likely to feed through to lower credit growth," she said.

"This is a not undesirable outcome given regulators’ concerns about the increasing risk of highly indebted households. A slowdown in credit growth could take further macroprudential tightening measures off the table, though it is a little early to be sure."

Photo by Waldemar Brandt on Unsplash