Treasury findings show the pandemic flushed households with extra liquidity, with Australians better off by $200 billion in less than a year.

Prudential regulator data, which the Treasury report draws its findings from, indicates household bank deposits amounted to $1.1 trillion in November 2020, an increase of about $113 billion from January 2020.

Non-financial businesses' deposits also amounted to $691 billion, up about $104 billion from January, with a cumulative total of more than $200 billion.

This coincides with the household savings rate skyrocketing to 46-year highs throughout the pandemic.

Treasury appears to be using these findings as the basis for winding back JobKeeper and the increased JobSeeker supplement by March.

“The unprecedented economic support provided by the Morrison Government during the crisis means that even as JobKeeper and other temporary emergency support measures taper off a fiscal cliff is avoided,’’ Treasurer Josh Frydenberg said.

Previously, Mr Frydenberg has also said JobKeeper is a "temporary program designed to taper off as economic confidence and momentum builds".

The unemployment rate currently sits at 6.8%, while the Westpac-Melbourne Institute consumer confidence index sits at a ten-year high.

The Australian Council of Social Service (ACOSS) has also warned against cutting JobSeeker.

“The Federal Government is on a course to undo the remarkable achievement of alleviating poverty for 2.3 million people, plus over a million children, by repeatedly slashing the historic Coronavirus Supplement of $550 per fortnight introduced in March," ACOSS chief Cassandra Goldie said in December.

The raft of government support measures throughout the pandemic and recession has caused some data to be skewed, namely the consumer price index (inflation), according to the Australian Bureau of Statistics (ABS).

"While the effects of COVID-19 on the CPI are subsiding, they continue to impact some series in the December 2020 quarter, albeit to a smaller extent than in the June and September 2020 quarters," the ABS report said.

"In response to the COVID-19 pandemic, there was a significant, and in some cases, sustained shift in the spending patterns of Australian households."

The lockdowns and scarcity in some household goods, such as groceries, and office supplies, has skewed the CPI measurements by up to 7% throughout the June and September quarters.

Government support has also caused wild swings in measuring inflation in key sectors, such as childcare (pictured below).

"The CPI measures the out-of-pocket household expense, so any scheme that lowers the cost of the good or service is reflected as a price fall in the CPI," the ABS report said.

"Conversely, when the scheme ends and the cost of the good or service returns to the previous amount, this is reflected as a price rise in the CPI."

Other federal and state government initiatives impacting data include the HomeBuilder grant, and other grants seen in Western Australia and Tasmania. 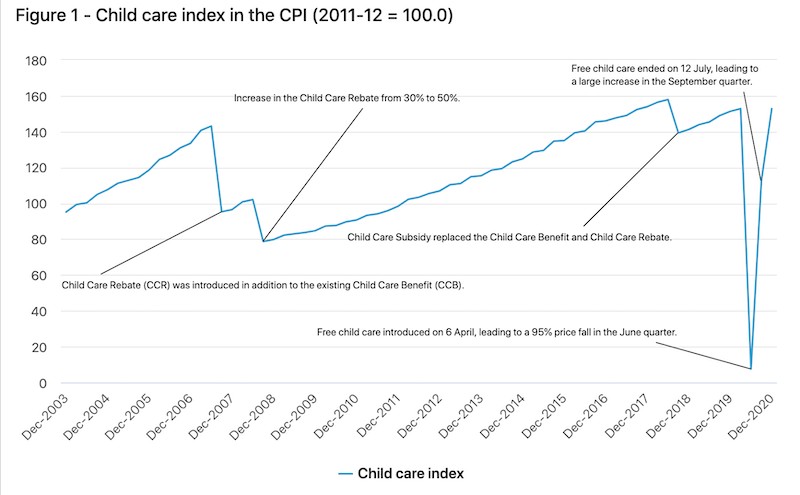 Photo by iMattSmart on Unsplash