The Westpac-Melbourne Institute of Consumer Sentiment increased by 6.2% to 118.8 in April from 111.8 in March.

The index is now at its highest level since August 2010 when Australia was rebounding from the Global Financial Crisis (GFC) and the mining boom was in full swing.

Westpac chief economist Bill Evans said it was an extraordinary result and had expected the index to fall in the wake of JobKeeper's expiry.

"The survey continues to signal that the consumer will be the key driver of above-trend growth in 2021," Mr Evans said.

"The survey was conducted in the week following the unwinding of the JobKeeper program. Initial fears that this and associated job losses would undermine confidence have proven to be unfounded." 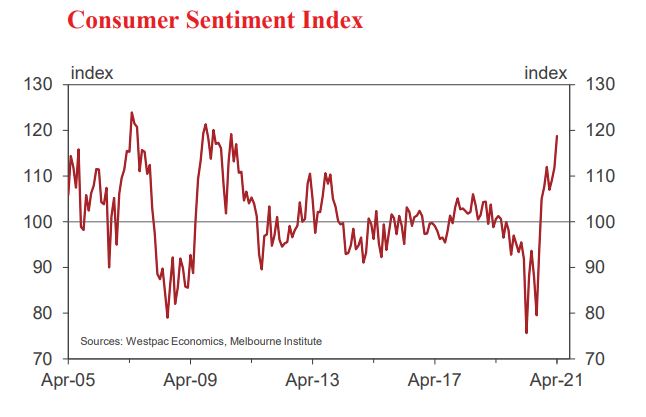 Even despite concerns around the AstraZenaca vaccine and the rollout falling well short of government targets, households appeared resilient, buoyed by positive labour market news.

"Job vacancies were reported to be 27% above the pre-COVID level in February last year while the February labour force update showed the unemployment rate had fallen from 6.3% to 5.8% with employment increasing by a stunning 89,000," Mr Evans said.

Those employed in the recreational services and hospitality industries saw large sentiment gains, up 23% and 14% respectively, suggesting easing of COVID restrictions was a massive boost to those groups.

Mr Evans noted this was particularly pertinent given these industries were most likely to be impacted by the expiry of JobKeeper.

Property prices rose at the fastest rate in 32 years in March, with values rising 5.8% in the first three months of the year alone, which Mr Evans noted was likely to also be a driver of confidence.

He noted the last time the index was at this level, the Reserve Bank had increased the cash rate by 150 basis points to 4.5% from its GFC low of 3%.

"That sharp increase in rates is likely to have contributed to the Index falling 25% over the following year.

"No doubt the Reserve Bank will be aware of that period and continue to tread carefully with the cash rate."

Despite high consumer confidence, home buyers appear to be deflated by the rapidly rising property prices.

The 'time to buy a dwelling' index fell by 7.9% in April and now sits 18.8% below its recent November peak.

In contrast, the house price index expectations continued to rise, spiking 2.7% in April to be 8% above its pre-pandemic level.

Mr Evans forecasts the RBA will do little of note in its next meeting on May 4, a week before the Federal Budget drops, but expects the central bank to implement measures to stem house prices next year.

"It is also likely to confirm that there is no immediate intention to intervene in the housing market using the macro-prudential-style measures seen in 2015 and 2017.

"Westpac expects that approach to change by the middle of 2022 as the authorities respond to further increases in prices and a likely lift in investor activity – in line with the signals emerging from this month’s survey."