New data has revealed total payroll jobs fell by 7.3% over the seven weeks from mid-March to early May.

The figures released by the Australian Bureau of Statistics (ABS) today showed residents in New South Wales (NSW) and Victoria were the hardest hit by COVID-19 lockdowns.

“The latest data shows a further slowing in the fall in COVID-19 job losses between mid-April and early May,” Mr Jarvis said.

“The largest net job losses over the seven weeks of the COVID-19 period, in percentage terms, were in Victoria and New South Wales, where the falls in payroll jobs were around 8.4% and 7.7%.

“Payroll jobs worked by people under 20 continued to show the largest falls (-14.6%), and were particularly high in some states and territories, such as the Australian Capital Territory (-19.2%).”

However, Mr Jarvis said there was cause for optimism, with hard-hit industries now showing a reduced impact in the most recent weeks.

“The week-to-week changes are much smaller than they were early in the COVID-19 period. 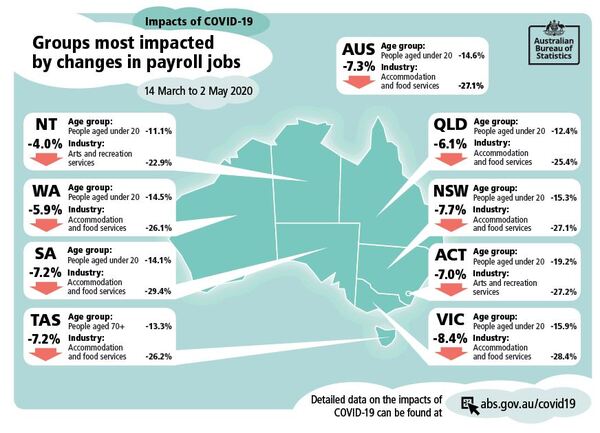 In the week ending 14 March, when Australia recorded its 100th confirmed COVID-19 case, payroll jobs for females decreased by 7.1% and 6.9% for males.

For the same period, industries which saw the largest falls in jobs were professional, scientific and technical services, decreasing by 8.0%, and information media and telecommunications which decreased by 5.3%

In contrast, economic conditions were mixed.

‘Time to buy a major household item’ strengthened again, up 3.6%, while the four week moving average for ‘inflation expectations’ was stable at 3.4%, though the weekly reading slipped to 3.3%.

"As a result, ‘future financial conditions’ is now only around 5% below the long run average, though overall sentiment is closer to 20% below average.

"With more good news about the easing of restrictions likely, it seems reasonable to expect further gains in sentiment.

"Consistent with this, ANZ-observed card spending data shows household spending is holding up."