Ahead of the Federal Budget for 20/21 being handed down on October 6, nearly 50 of Australia's top economists have picked what they think the Government should do.

Economists were asked by The Conversation to rate 13 stimulus options in terms of "bang for the buck" - that is, how effective they'll be at stimulating the economy over the next couple of years.

Each of the 49 economists surveyed were asked to nominate the four most effective options for boosting the economy from the 13 choices, and overwhelmingly, boosting social housing and the JobSeeker unemployment benefit were the most popular options.

Bringing forward the legislated personal income tax cuts was one of the least favoured options, with 20% agreeing this is the right move at the moment.

The least popular stimulus measure was "incentives for cleaner fossil fuel energy", picked just 4% of the time. "Incentives for renewables" was more popular at 27%. 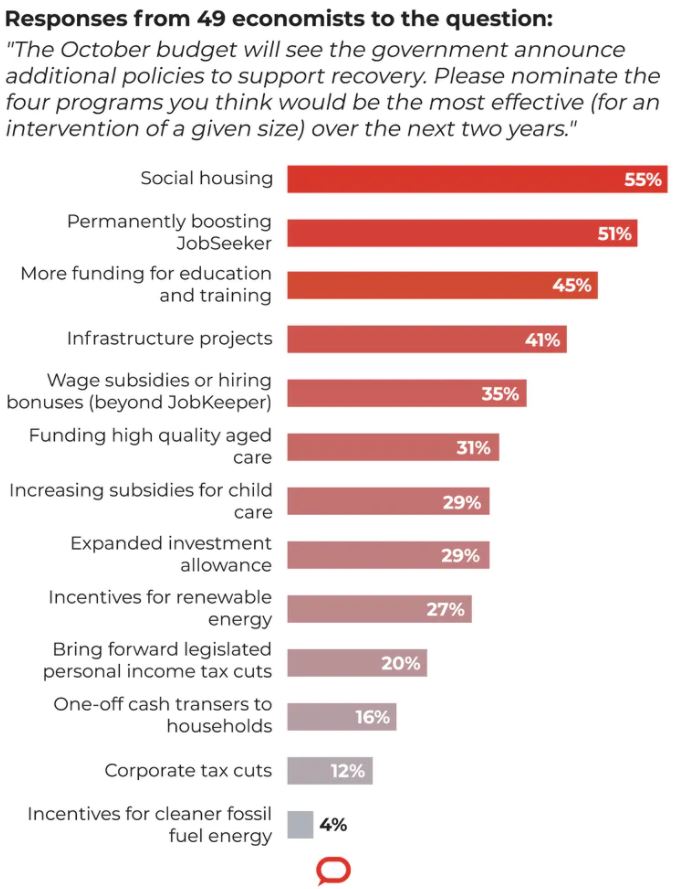 Funding for social housing has been discussed as a key policy initiative the government should pursue in response to COVID-19.

Calls for more social housing stimulus became more pronounced in the wake of the government's HomeBuilder announcement, with the likes of Shadow Treasurer Jim Chalmers and ACOSS CEO Cassandra Goldie calling for the sector to be given a shot in the arm.

"Social housing would leave us with something worthwhile (as did the school hall building program during the global financial crisis) in addition to providing work for the building industry," Business and Economy Editor of The Conversation Peter Martin said.

"Alleviating homelessness would be a lasting benefit."

Monash University econometrician Lisa Cameron said initiatives such as social housing can boost the economy through construction and innovation.

"Social housing provides something invaluable to the less well-off in our community. Having spent considerable time in the US, I am disturbed to see Australia going down the same path of increasing homelessness," she said.

"Investing in infrastructure, including social housing and renewable energy, paves a way for long term growth, while meeting targets other than just purely economic targets."

The second most popular option, endorsed by 51%, was permanently boosting JobSeeker, previously known as Newstart.

As of Friday, the temporary JobSeeker rate of $1,200 per fortnight was cut by varying degrees, and as things stand will be cut again the controversial old $40 per day rate on December 31.

A recent Deloitte report found the proposed cuts will cost 145,000 jobs and $30 billion to the economy over the next two years.

The Australian National University (ANU) also found the reduction in payments in September would push more than 700,000 people into poverty when compared to current conditions.

Melbourne University economist John Freebairn pointed out that with no real increase in Newstart since 1993, those on the increased JobSeeker rate would be far more likely to spend every extra cent rather than save.

"Of course work incentives matter but the rate was so low that it was counterproductive - interfering with job search and job readiness. Boosting the payments now would also be good stimulus because we know that every dollar will hit the economy," Ms Wood said.

Despite the government strongly hinting it will bring forward legislated tax cuts for 2022 in response to COVID-19, such a move was relatively unpopular among the economists surveyed, along with giving cash payments to households.

These measures were supported by just 20% and 16% respectively.

Saul Eslake of Corinna Economic Advisory said that while he agreed with the Treasurer's statement that early tax cuts would "put money in people's pockets", there's no guarantee high-income earners who primarily benefit from the cuts would spend that money.

"There's no guarantee that the people into whose pockets most of that money would be put, would take it out and spend it in sufficient quantity to give the same stimulus value for the total cost as could be obtained in other ways," Mr Eslake said.

Use tax cuts in combination with other stimulus measures

Professor Rachel Ong ViforJ at Curtin University's School of Economics meanwhile argued for a combination of these measures discussed.

"Bringing forward legislated tax cuts should boost spending by consumers while promoting incentives to work, as opposed to increasing government cash transfers, which will likely blunt work incentives," she said.

This is a similar argument made by Deloitte Partner Chris Richardson, who in a report released today argued that Australia should welcome the tax cuts "with open arms" in addition to other stimulus measures.

"We’ve always said that the personal tax cuts weren’t unfair, but that they are too big. And now COVID is here, raising the question of how good the tax cuts would be as stimulus," Mr Richardson said.

"Withdrawing government support by dropping proposed tax cuts would be downright dumb. The key policy question lies around changing from government emergency support as a defence against the virus to a fight against unemployment.

Mr Richardson also argued in the same report that slashing income support would be a big mistake.

This year's budget will be delivered on October 6, deferred from a few months prior in response to the initial COVID-19 outbreak.

Regrdless of what the government decides to do, you can keep up with the news out of budget night here at Savings.com.au.