Investing app Raiz has seen its number of users increase by 53.6% in the six months to 1 December 2020.

According to the Micro-investing app's half-year results for 2020 released today, it added more than 343,500 active customers in the back half of last year.

It also grew its funds under management by 33.5% to $605.6 million amid surging global markets and low-interest rates potentially driving many Australians to chase higher returns for their spare cash.

“The growth reflects several factors including the successful execution of our strategy with growth being driven by an increase in both active customers and revenue per customer, strong customer loyalty, the low cost of acquiring customers, and the successful rollout of new products and services," he said.

See also: How to start investing for millennials

Despite Australians stashing a collective $200 billion away in their bank accounts during last year's recession, interest rates on deposit accounts are extremely low.

If NAB's latest figures are anything to go by, roughly 20% of deposits earn less than 0.01% p.a, while Savings.com.au research found the average term deposit rate across all terms is just 0.45% p.a.

“There were several reasons for our continued growth, such as new products. But because traditional savings rates are so low now, consumers are looking for that little bit extra, as well as improving their financial experience, education and literacy," CEO Brendan Malone said.

"We believe that’s why micro-investing is an attractive alternative driving our customer acquisition numbers.”

While all investments carry risk, micro-investing platforms such as Raiz are widely considered to offer 'investing for beginners', allowing users to frequently invest small amounts into set portfolios.

According to Raiz's half-year report, two-thirds of its users started investing for the first time using the app, with 39% now using it as their sole investment platform.

Just over one quarter (26%) have gone on to use different investment methods as well as Raiz.

In a market that saw much volatility last year due to the virus, 36% of Raiz users said volatility was not impacting their investing habits at all, and 29% of app users reported investing even more than they did before. 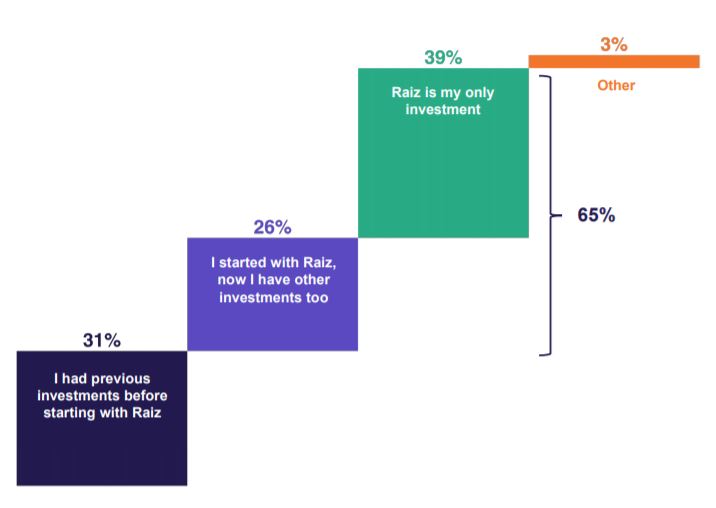 How much do Raiz users invest? How much does Raiz cost?

Raiz has a far smaller minimum investment limit compared to other traditional share investing platforms, which can often require thousands of dollars to start.

Raiz's average account balance among customers increased to $2,224 in the back half of last year compared to $1,813 in the first half (an increase of about 23%).

With 58% of accounts having more than $10,000 in them, the relatively low average balance suggests there are many accounts with small amounts, which can carry an extra maintenance fee.

On average, each account nets Raiz a bit over $20 in revenue, thanks mostly to fees.

Photo by Kenrick Mills on Unsplash