Wages rose 0.6% in the December quarter 2020, but maintained the historically low annual rate of 1.4%, seasonally adjusted.

The moderate growth recorded by the Australian Bureau of Statistics (ABS) was ahead of the 0.3% rise pencilled in by economists.

Wage growth continues to outpace inflation which sits at 0.9% annually according to December data from the ABS.

"The phased implementation of the Fair Work Commission annual wage review also had a small positive impact on wages." 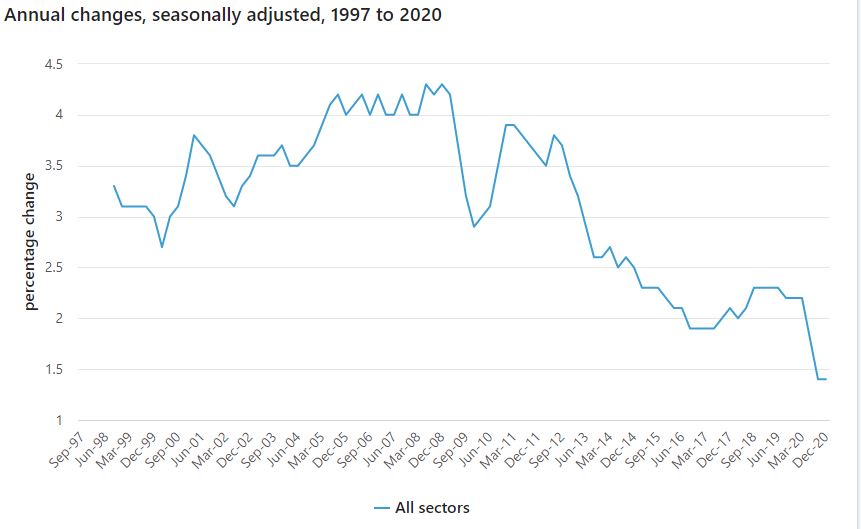 She added the public sector was still suffering from COVID-related factors, with the wage growth in the private sector almost doubling public's.

"Wage freezes have had an impact on the public sector which recorded its lowest annual increase (1.6%) since the commencement of the series.”

Private sector growth was fueled by the continued restoration of hourly wages back to pre-pandemic levels, following reductions in the previous quarters.

IFM chief economist, Alex Joiner, noted on Twitter the rebound in wage growth may cause the Reserve Bank (RBA) to have to rethink policy.

Wages data rebounds in Q4 after recent weakness, will add to the belief that the #RBA will need to wind back policy sooner than it has outlined but it may just be a one off #ausbiz pic.twitter.com/rusyWmvGfW

"The RBA has stated that it will not raise the cash rate until consumer price inflation is sustainably within the 2 to 3% target," Mr Holloway said.

"To achieve this, the bank believes that annual wages growth will need to be running at around 3½ to 4%. Such a pace has not been seen since the post-GFC mining boom in 2012.

"Although the labour market has posted a significant recovery since the nadir of the crisis, the unemployment rate (6.4% in January) is still roughly 1.3% above pre-COVID levels.

"Full employment, which the RBA estimates to be in the order of 4.5%, is still a way off - along with any consequent lift in wages growth."

The professional, scientific and techinical services industry saw the biggest rise in wage growth, up 1.2%, after significant wage reductions saw it fall 0.5% in June.

Annual wage growth to the December quarter 2020 ranged from 0.3% for the accommodation and food services industry to 2.4% for the education and training industry.

Victoria recorded the highest quarterly rise at 0.7%, after wage reductions contributed to a 0.1% fall in June and minimal wage growth in September (0.2 per cent).

Photo by Mario Gogh on Unsplash