Photo by Todd Diemer on Unsplash

The number of temporary loan deferrals due to COVID-19 among Australian banks fell slightly in July 2020, as more customers started to make repayments on their loans.

According to data released by the Australian Prudential Regulation Authority's monthly data, $240 billion of loans were subject to deferral at 31 July, representing 9% of total loans.

In terms of housing loans, $167 billion were deferred, which is also 9% of the $1.8 trillion in total home loans.

This is an improvement on June's figures, which had 11% of mortgages deferred to the value of $195 billion.

Also shown in the data is the number of exited or expired loans increasing from $33 billion in June to $40 billion in July.

The number of Australian borrowers resuming mortgage repayments in July fits with the Australian Banking Association's call for borrowers to start resuming repayments if they had the capacity to do so, also in July.

“Those who are able to repay their loans will resume doing so, which is in the best interests of those customers and allows support to be directed to those who need it," ABA Chief Executive Anna Bligh said in July.

"Encouragingly, many customers have already chosen to resume making repayments."

The numbers also support statements made by the likes of ANZ and Commbank CEO's Shayne Elliott and Matt Comyn to the Standing Committee on Economics last week, saying many customers had begun to repay deferred loans.

"As the deferrals finish, we believe most will resume paying down their loan. And, encouragingly, we’ve already seen a number of customers make some kind of repayment," Mr Elliott said.

"However, the reality is that some will need further help."

"By the end of September we will have made calls to around 250,000 customers, over a two month period," Mr Comyn said.

"Many of those we contact will be able to recommence their repayments. Some are facing more difficult circumstances."

The six-month mortgage holiday for customers is almost over, with more than 80,000 loans to be assessed by the end of September and 180,000 by the end of October.

However banks are offering a further four-month extension on a case-by-case basis for those who need it.

ANZ meanwhile had the biggest exposure to housing loan deferrals among the big banks at 12% ($30 billion), and actually increased its exposure by 4%.

Westpac had the lowest exposure to housing loan deferrals at 6%, worth around $30 billion (ANZ has a smaller loan book than Westpac).

Arab Bank Australia had the highest exposure to deferred housing loans at 17% of its overall housing loan book ($65 million).

Many of the loans that have been deferred over the COVID-period occurred due to households losing income and jobs, with Commbank full-year data showing that 14% of deferred home loans had at least one borrower that was receiving JobSeeker payments.

Smaller 'public sector' credit unions and mutual banks had some of the lowest levels of loan deferrals as a proportion of total housing loans.

However, Teachers Mutual Bank has highest share of 'risky' loans

Teachers Mutual Bank had the highest proportion of high LVR (loan-to-value ratio of 90% or more) housing loans under deferral, at 28% of its total deferrals.

Victoria Teachers Limited came in second for high LVR loans deferred at 21%, while Auswide bank was third at 18%.

The big four banks' proportion of high-LVR loans in their housing deferral books were:

Arab Bank and G&C Mutual Bank had 0% of its deferred loans on a LVR of 90 or higher.

As much as 40% of NAB's housing deferrals were investment loans, worth around $12 billion.

Westpac's investment loans were deferred at a rate of 36%, while Commbank and ANZ had 33% and 32% respectively.

Around 16% of all deferred loans among the authorised deposit-taking institutions (ADIs) monitored by APRA were interest-only, the cheapest form of home loan repayment, which might represent a problem once loan deferrals end.

73% of Australian Mutual Bank's $26 million in deferred loans were interest-only. 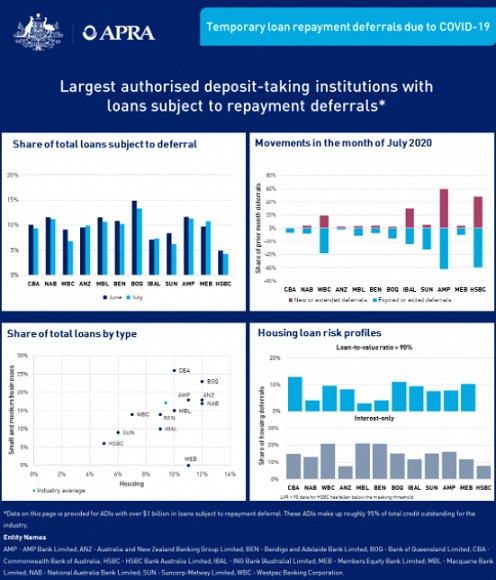