House price boom continues as values rise 2.2% in May The property market's hot streak rolled on in May, with national home values rising 2.2% in May.

According to CoreLogic's latest data, the May rise was stronger than the 1.8% spike seen in April but weaker than the 32-year high recorded in March when values surged 2.8%.

For the second time in three months, growth in the capital cities outpaced their regional counterparts.

The combined capital city index rose 2.3% in May compared with a 2.0% rise across the combined regional areas.

CoreLogic's research director Tim Lawless said growth conditions remained broad based both geographically and across the housing types and valuations.

“Values were up by more than 1% across every capital city over the month, with both house and unit values lifting across the board," Mr Lawless said.

"Of the 334 SA3 subregions analysed by CoreLogic, 97% have recorded a lift in housing values over the past three months.

"Such a synchronised upswing is an absolute rarity across Australia’s diverse array of housing markets.”

Across the capitals, Hobart was the strongest performer with a 3.2% jump, while Perth saw the weakest growth at 1.1%.

In the regions, regional New South Wales (NSW) led the way with a 2.5% spike, while values in Western Australia regressed 0.1%. 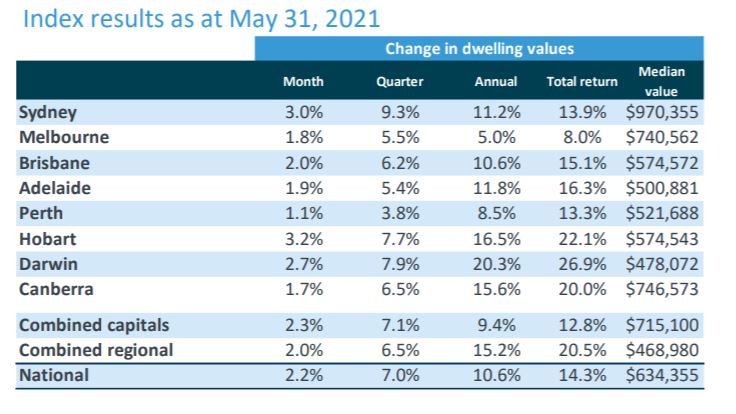 However, he noted despite the consistently strong headline result, the underlying trends had shifted over the last year.

“From a geographic perspective, it was the smaller capital cities that led the housing market out of the COVID slump, but now Sydney has risen through the ranks to record the largest capital gain over the past three months with values up 9.3%.”

CoreLogic said they expected values to rise throughout this year and next, albeit at a slower pace.

"Messaging from the RBA has indicated they will be watching for any signs of a deterioration in credit standards that could be a trigger for tighter lending rules."

CoreLogic said worsening affordability pressures were likely to impact first home buyers more than other segments of the market, with signs activity from the group is already lessening.

Investors are stepping up their activity across the market, which may account for the continued strength across the board, despite affordability constraints.

CoreLogic noted the reduction in Federal Government fiscal support had little to no impact on housing demand or growth in home values to date.

Growth conditions had eased a little over recent months but remained strong, with CoreLogic noting the first quarter of the year was seasonally strong for rental markets.

The monthly increase in capital city dwelling rents eased from an average of 1.0% over the March quarter to 0.6% over the past two months.

Similarly, the rate of growth in rents across the combined regional areas of Australia eased back from an average of 1.4% in the March quarter to 1.0% through April and May.

Sydney and Melbourne continued to have the weakest rental conditions, especially across the unit sector where international border closures have had a more significant impact on demand.

Photo by Titus Aparici on Unsplash