NAB full-year results show its number of mortgages in deferral have fallen by almost 70%.

NAB offered deferrals to a peak of 110,000 home loan customers over the coronavirus period.

This is worth less than 5% of NAB's total loan book at the moment, and according to NAB, a further $10 billion worth of loan deferrals are expiring come the end of November.

NAB is the last of the big four banks to release its full-year results, along with its data on mortgage deferrals, which are a critical point of reference for how Australian households will cope financially post-COVID, especially after government support is wound back.

The Australian Banking Association (ABA) released data in mid-October saying repayments had resumed on nearly half of all deferred mortgages.

Just this week, Westpac's full-year results showed 31% of its deferred customers had to request a further four-month extension.

Each of these figures from the biggest banks are above the benchmark set by the Reserve Bank, which recently predicted that just 15% of deferred mortgage customers would struggle to resume repayments.

See also: Have a mortgage deferral? Here's how your lender is expected to help when it ends

Most of NAB's remaining deferrals in Victoria

NAB's deferral data fits the trend seen by other banks where Victorian customers - those hit hardest by the virus and subsequent lockdowns - occupy the highest number of deferral spots.

According to NAB, Victoria represents 41% of referrals to NAB Assist, 37% of deferral extensions granted and 33% of remaining deferral balances.

Westpac, by comparison, also had Victoria at the highest deferral extension rate at 38%, ahead of the national average of 31%.

Promisingly, 38% of NAB's customers in deferral elected to resume their repayments prior to their deferral expiry, as recommended by the ABA, while 54% advised their intent to resume repayments at the end of the deferral period.

Only 2% of NAB's customers asked for a deferral extension, while 1% had to convert to interest-only loans,

NAB also followed a market trend where customers with a higher LVR - loan-to-value ratio - were over-represented.

NAB had 7% of its deferred loans among customers with an LVR of 90% or higher, which is higher than the market average of 5%.

According to Australian Prudential Regulation Authority (APRA) data, the level of 90% LVR loans continues to be disproportionate with the wider market in terms of deferrals.

Those with an LVR of 60 or less accounted for 34% of NAB's deferrals, but this segment makes up 43% of the home loan market. 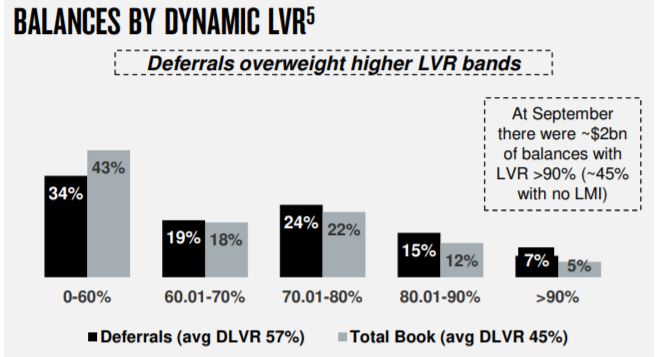