Home / Compare Savings Accounts / How to spot a pyramid scheme

How to spot a pyramid scheme We’ve all seen them splashed across our social media feeds or been hit up with the dreaded “Hey!” on Facebook from some random you went to high school with who you haven’t spoken to in ten years.

Yep, we’re talking about pyramid schemes and you’re just as likely to come across a post spruiking a “fantastic new business opportunity!!!!” while you scroll your Facebook feed as you are to see engagement pics or a million photos of your cousin’s/coworker’s/highschool acquaintance’s new baby (nobody cares).

According to the Australian Competition and Consumer Commission (ACCC), Australians have lost $348,657 to pyramid scheme scams so far in 2020. Last year, we lost a staggering $1.6 million.

Pyramid schemes are a booming business and have been thriving during the COVID-19 pandemic: Never has there been a better time to lure in someone recently unemployed by asking “How would you like to earn five figures a month working from home, no experience required?”.

But as the old saying goes, if something sounds too good to be true it probably is, and that’s definitely the case here. Research by Jon M Taylor, founder of the Consumer Awareness Institute in the US, found that 99% of multi-level marketing distributors (MLM) lose money. That means that less than one in 100 MLM participants made a profit, and at least 99 out of 100 people who participate in an MLM not only make no money, they lose money.

Now before you start shaking your fists and shouting at your computer screen saying “but MLM’s aren’t pyramid schemes!!!!” we’ll get into how they’re (slightly) different in a minute: but if something looks like a duck, swims like a duck and quacks like a duck…. it’s probably a duck. Get my drift?

What is a pyramid scheme?

A pyramid scheme is an illegal money-making scheme that makes its money by recruiting people rather than actually selling any tangible products or services.

Members are usually recruited via word of mouth through friends or family and are asked to pay a sign-up and/or monthly fee to join. To make this money back, new members are promised they will be paid if they recruit more members into the scheme. Simply put, pyramid schemes rely completely on the recruitment of others to make money. But in order for everyone in the scheme to actually make any money, there needs to be an endless supply of new members. In reality, the ACCC says the number of people willing to join the scheme (and therefore the amount of money being made) will dry up very quickly. 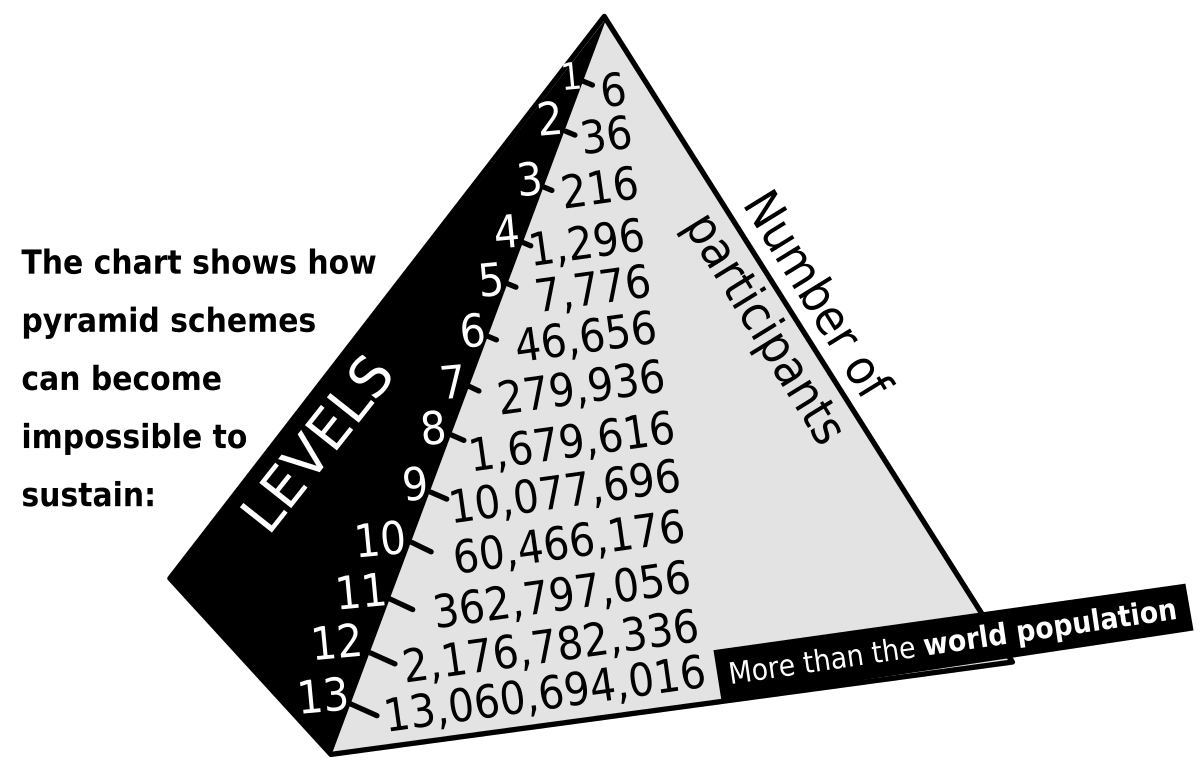 It’s called a pyramid scheme because the top 5% of promoters at the very top of the pyramid make their money by getting people to join the scheme, and then pocket the fees of everyone else below them.

Eventually, it just becomes impossible for anyone at the bottom to actually make any money at all, and the very small minority at the top of the pyramid are rewarded at the expense of everyone below them.

How to spot a pyramid scheme

Often, people are recruited into pyramid schemes by a family member or a friend (who often aren’t aware it’s a pyramid scheme either) so it’s understandable that many people don’t think it through properly before signing up. After all, you trust your family and friends so if your mum or your best friend is doing it, it must be okay… right??

Bah bow. According to the ACCC, here are some classic warning signs of pyramid schemes to keep an eye out for:

Unlike pyramid schemes, MLM schemes do actually sell a tangible product. So in an MLM scheme, you sell a product in addition to recruiting new members. MLM representatives then make a commission on their sales as well as on the sales of the people they recruit. But when you drill down into it further, you’ll find that MLM schemes make most of their money through the recruitment of new members - not from the products they sell. It’s allllllll about recruitment!

So while MLM schemes aren’t technically pyramid schemes, they are very similar. Again, if it looks like a duck, swims like a duck and quacks like a duck… well, you know the rest.

In an MLM scheme, consultants generally ply their wares by selling door to door, through their network of friends, or by hosting in-home parties. Remember Tupperware parties? Yep, they were pretty much the OG in the MLM world.

Mary Kay and Avon are two other really well-known examples of MLMs but lots of new companies have sprung up over the years, including the likes of doTERRA, Younique, Isagenix and Arbonne. You’ll find that most MLM companies sell things like essential oils, weight loss products, beauty and skincare products, and kitchen appliances: All products that appeal most to women, who are often the ones being lured in.

Fueled by promises of “get rich quick while working from home!” and “be your own boss!”, stay-at-home mums often are often the targets of these schemes because they’re made to feel like they’re being empowered when in reality they’re being exploited.

As our old mate from the Consumer Awareness Institute found, 99% of MLM distributors end up losing money. Let’s use US-based MLM Monat as an example. According to their 2019 income disclosure statement, a ‘market partner’ (the first rank which makes up 93.54% of Monat distributors) earned an average annual income of $119USD. That’s $160 Australian dollars. Yep, 93% of Monat market partners only earned $160 buckaroos a year.

That’s without even taking into consideration that these numbers don’t include any expenses incurred. If you look at the fine print in the income disclosure statement, you’ll notice it says:

“The above figures include only bonuses, commissions or other remuneration paid to Market Partners by MONAT Global. They DO NOT take into consideration any expenses incurred by Market Partners in operating their businesses or profits or losses when products are resold by Market Partners. Expenses incurred may include, but are not limited to, the purchase of a starter kit, payment of renewal fees, purchases of product samples or inventory, shipping costs, transportation costs, training and educational expenses, and travel expenses. In some cases, these costs and expenses may exceed the amounts earned by Market Partners. Monat Global makes no guarantee of financial success and you may lose money.”

In other words, the annual income many people make is less than the money they spend on expenses, so they’re literally paying to be a part of this MLM scheme.

Ponzi schemes, which like pyramid schemes are also illegal in Australia, are fraudulent investment scams that convince people to invest their money by promising high returns. But what’s actually happening is that Ponzi scheme promoters are paying existing investors with money collected from new investors - your money isn’t actually being invested in anything.

All Ponzi schemes eventually fall apart according to ASIC’s Moneysmart website, because the promoter either spends the money too quickly or the number of people willing to invest dries up. Most people hear about Ponzi schemes through unsuspecting family members, friends or work colleagues.

How do you spot a Ponzi scheme?

Moneysmart says some classic warning signs to keep an eye out for is if the rate of return is suspiciously high (some promise absurd returns of 10% a month), if someone you trust tries to recruit you, or if that person trying to recruit you has already invested in the scheme and received great ‘dividends’. If something seems too good to be true, it probably is.

What to do if you suspect a scam

If you think you’ve come across a pyramid scheme or other scam, the first step is to report the scam to the ACCC. It’s also a good idea to check if that company is listed on ASIC’s list of companies you shouldn’t deal with.

Don’t invest any more money and warn your family and friends if they’ve also been duped. You can find more information on where to get help if you’ve been scammed via the ACCC’s Scamwatch.

There are some people out there for whom certain MLMs (like Tupperware) can work well for if it fits in with their lifestyle. If you’re considering becoming part of an MLM as a side hustle, make an educated decision by reading their income disclosure statements first, using our breakdown above as an example of what to look for. If after this, you’re still keen then go for it - just make sure you’re completely informed of the risks first.

But in our opinion, if you’re looking for a side hustle, you’d be far better off finding other ways to make money online such as through websites like Airtasker or Fiverr, or by selling your stuff on Gumtree or Facebook Marketplace. You could also consider signing up to Uber or any of these gig economy online platforms for some extra cash. If you’re thinking about signing up to an MLM because you’ve lost your job and need an income, MLMs are definitely not the way to go.

At the end of the day, if you’re going to put that much effort into spruiking someone else’s products in an MLM scheme, you would be far better off starting your own business and promoting your own products - if you have a talent or a skill and are prepared to put in the time and effort.

If not, we strongly recommend staying away from MLM and pyramid schemes and reporting them to the ACCC if you come across one.

Photo by The World Hopper from Pexels