How to keep your wealth growth on track Simply keeping a record of how much you’re sitting on every payday can motivate you to save more, help you visualise your financial future and put you on the path to prosperity and financial freedom.

Do you know what your net wealth is? As in, the total of your bank accounts and superannuation, plus the value of any investments and major appreciating assets (such as a home), minus any debts? This number represents your financial worth, and regularly keeping a record of it in a spreadsheet can be one of the simplest ways to stay on top of your finances.

On the face of it, we Aussies are already pretty darn good with money, with the highest median net wealth per adult in the world.

In spite of this wealth, Australia is often laughed about overseas as an upside-down backwards country of convicts, surfers, sheep-shearers and crocodile hunters. Some perceptions are hard to shake off, it seems.

Perhaps it’s because we’re happy to perpetuate it. Most Australians don’t consider themselves rich, nor are they comfortable with such a label. We tend to prefer to associate ourselves with the tag of the fair dinkum battler.

But a lot of us really are battling. Standalone statistics often don’t tell the full story.

Wealthy on paper, but still struggling?

While the median Australian may be worth $271,000 on paper, a lot of this probably isn’t readily accessible.

Most of this wealth is likely to be tied up in a home, given Australia’s inherent penchant for owning property (the so-called ‘Great Australian Dream’).

A significant portion is also bound to be tucked away in superannuation, which most Australians can’t legally access until they’re 65.

If you look at our savings accounts, over a quarter of Australian households have less than $1,000 in the bank to dip into (according to ME Bank’s 2018 financial comfort report), with Australia’s notoriously high cost of living making it difficult for Aussies to put money aside.

While the big property price rises around the country over the last decade may have made Aussie property-owners wealthier, it’s also made new mortgages bigger. We’re now at a point where around a third of owner-occupied mortgage-holders are suffering from mortgage stress.

The number of households in mortgage stress has reached a record high, with almost a third of home loan customers in financial trouble. @TMFScottP #7News pic.twitter.com/swrsQvClAL

It could get worse over the next two years as hundreds of billions of dollars’ worth of interest-only home loans expire, requiring the higher principal and interest repayments which many interest-only borrowers will struggle to afford.

With so much focus on paying down the mortgage and affording other costs of living, it’s likely many homeowners in Australia don’t have a true awareness of their wealth, which can make them poor at managing it.

Higher house prices have also locked many aspiring homeowners out of the property market, especially in Sydney and Melbourne. Many young Australians, in particular, are losing financial confidence as they often face an uphill battle to save up enough for a deposit on a home while feeling pressured to keep up the appearance of living an expensive lifestyle that matches what their friends on social media are bragging about (e.g. glamourous European holidays, flashy new cars, fine dining, dressy cocktail parties etc.).

Laura Higgins from @ASICmedia says 50% of young people report a lack of confidence dealing with their personal finances, with higher rates of impulse spending and finding it harder to keep track of day-to-day spending pic.twitter.com/ULUjN3CLcv

So amid these challenges, Aussies could be forgiven for losing sight of their finances and struggling to save and invest. But good financial management doesn’t have to be the sole domain of financial planners, certified accountants, millionaires and money nerds. Anyone can do it, no matter your salary, debt levels or whether or not you own a home.

A way to stay on track

One easy way to start being more fiscally responsible is by simply tracking your wealth’s movement each month, or whenever you get paid. In doing so, you’re likely to feel more encouraged to keep it growing and be better at allocating it.

Seeing your wealth’s growth should also provide you with a satisfying sense of optimism for the future – serving as a healthy reminder that every paycheck is actually making you richer.

Wealth tracking for beginners: An example

Here’s a simple hypothetical example to demonstrate how one might track their wealth.

Nellie is 25 and wants to get on top of her finances, with the long-term goal of saving up a deposit for her first home. She begins tracking her wealth with:

She sets up a spreadsheet to reflect these assets in three separate columns, with a fourth column set up with a formula (=b2+d2+f2) that adds up the numbers in each of these cells to reflect her total wealth ($20,000).

Nellie does not currently have any debt (e.g. home loan, car loan, credit card etc.), but if she had, say, a $2,000 credit card debt, she would put this in another column and set the total wealth formula to subtract it (so her total wealth would be $18,000).

Nellie’s job pays her around $41,000/year (excluding super), which equates to approximately $3,000/month after tax. She decides that every payday (always around the start of the month), she’ll update her spreadsheet to get an idea of how much her wealth is growing.

So, on her payday in February, she takes a look at the value of her shares, her ETF and the total balance of her bank accounts and adds these into a new row on her spreadsheet, with “change” columns added next to them to reflect the rise (or fall) in the values.

In each of the “change” cells is a simple subtraction of this month’s value minus the previous month’s, using each value’s cell coordinates. For example, to calculate her change in cash, Nellie enters “=b3-b2” in the cell.

The beauty of using a digital spreadsheet (such as Google Sheets or Microsoft Excel) is once you’ve entered in the formula once, you don’t have to enter them again. To apply the same formula for the rows below, simply click and drag the bottom righthand corner of the cell to the cell below.

For example, instead of entering “=b3+d3+f3” into the total wealth column for February, Nellie can simply click and drag down the bottom right hand column of cell above to calculate her wealth for February: 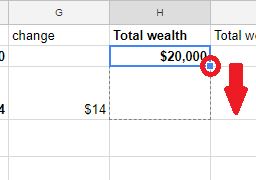 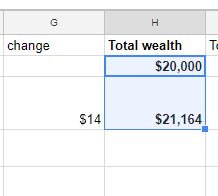 Nellie also adds a “Total wealth growth” column next to her “Total wealth” column to reflect the most important number of all – how much her overall wealth is growing each month. Like the “change” columns, this requires a simple subtraction of February’s value minus January’s using the cell coordinates – i.e. “=h3-h2”.

So now, her wealth tracking spreadsheet is beginning to take shape:

The rest of her paycheck went towards her rent ($200/week), groceries (only $50/week because she pools this together with her two housemates) and other various costs (e.g. phone bill, transport costs, gym membership, nights out with friends, weekly sports, retail therapy etc.).

She wants to get a better grasp of her costs over the month, so she adds another column – “Monthly spend”. To calculate this, she needs to subtract her monthly “change” in cash from her $3,000 pay plus any other boosts to her cash balance – such as Nellie’s grandma depositing $100 into her bank account as a belated birthday gift.

Nellie’s doing well to only spend around $2,000 over the month, but she feels motivated to spend less next month.

Of course, some months will have more bills due than others, so Nellie’s monthly spend figure is bound to fluctuate to some extent. This is OK, and an important thing to realise so she doesn’t get despondent when one or more of her larger and irregular bills lands in the mail.

Nellie may also wish to add other columns to her spreadsheet where she can provide more context to her wealth’s movements each month, such as: 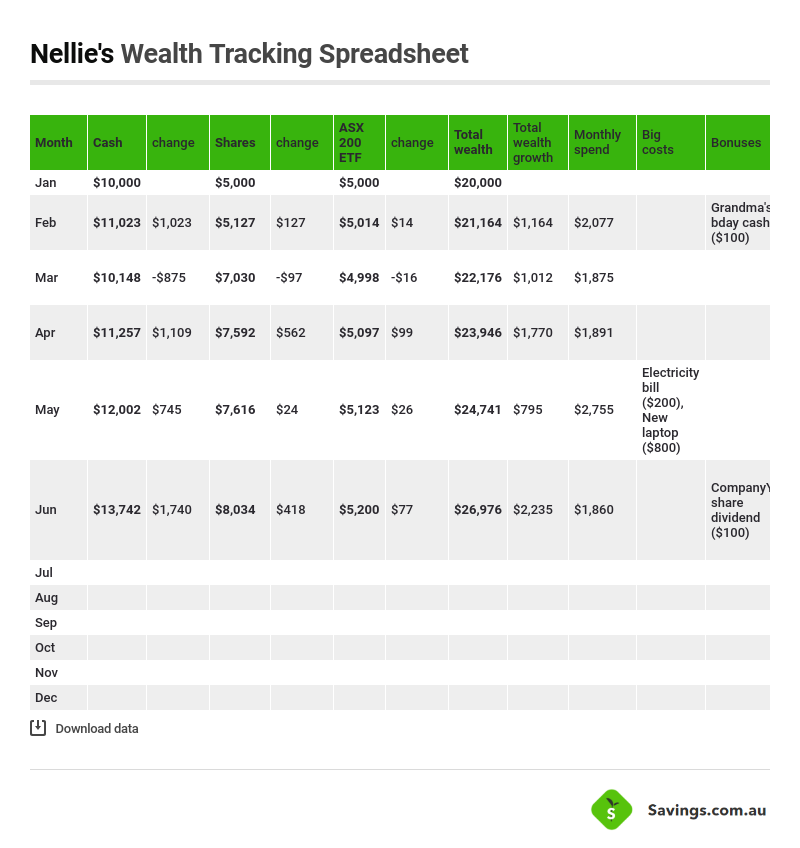 Nellie’s very happy with how much her wealth has grown since January, growing it from $20,000 to $26,976 as at the start of June. She decides to plot it on a line graph with a linear* trendline to help her forecast what her wealth could be by December if it grows the way it has done over the past few months. Most spreadsheet programs come with tools that easily allow you to do this. 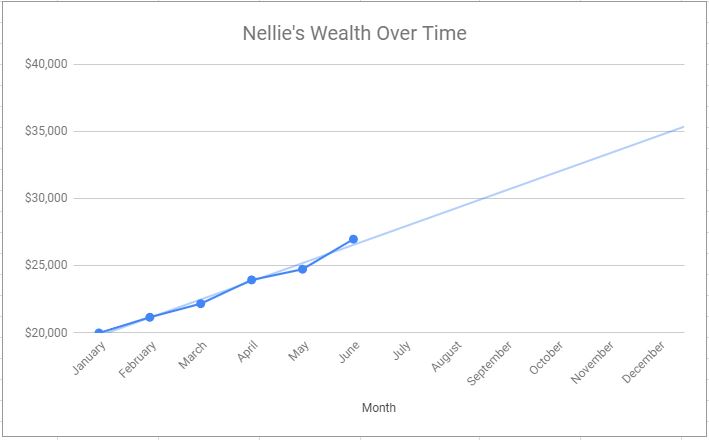 Nellie sees that if she continues to grow her wealth at the same rate, she could be worth $35,000 by December. This drives her to continue to save and invest.

*The value of Nellie’s investments (i.e. her shares and her ETF) should generally experience exponential growth (rather than linear) over the long term because of compounding returns.

By simply having a thorough awareness of how much you’re saving, spending and growing in wealth, you’re more likely to make smarter decisions with your money since you know exactly what you can and can’t afford.

Some readers might think it all sounds like too much effort, but just remember that it only takes around five minutes of your time each payday to plug some numbers into your spreadsheet to see how you’re going. After a few months, you’ll probably even enjoy doing this as you gain satisfaction from seeing your progress.