Home / Credit Cards / Balance Transfers / Should you cut up your credit card?

If you’re feeling enslaved by your credit card dependency, you may feel liberated by going to town on your card with a pair of scissors. But is it the right thing to do?

Australians seem to have a love-hate relationship with credit cards. We clearly love them: the latest RBA figures show there are currently more than 16 million active credit card accounts in Australia. When you take into account that there are 16.6 million credit-active Australians (based on research by Veda), that’s nearly one credit card per person – more when you consider that not every credit-active person will hold a credit card.

The hate part comes from the amount of debt we accrue on them. According to the RBA’s statistics, there’s almost $32 billion in credit card debt accruing interest in Australia (as at the end of September 2018), which equates to an average of around $2,000 per cardholder. A July 2018 Australian Securities and Investment Commission (ASIC) report revealed one in six consumers are struggling with this debt.

Almost two million Australians are drowning in credit card debt, and there's a good chance they may never pay it back. @Ross_Greenwood #9Finance pic.twitter.com/9pMVyFNavV

But the mere presence of a credit card in a spending addict’s wallet or purse can prove too much of a temptation to spend more, which is why some Aussie finance personalities encourage people to literally cut up these plastic cards.

Below are some of the key arguments for and against cutting up your credit cards.

The argument for cutting up your card(s)

We’ll start with the reasons why.

It can limit your spending

This is probably the most obvious reason for cutting up your card. If you have high amounts of credit card debt that keeps piling up, why would you keep one or more around at all times? That’s like a problem gambler having Sportsbet on speed dial.

While you can still spend with a destroyed card online, it does make it harder to remember your details at new stores if you can’t pull it out and look at it. Not having the card in your wallet or purse can have an instant impact on how much you spend, and can help stop your debts from piling up even further.

A balance transfer can provide you with the breathing space needed to help you whittle away your credit card debt with 0% interest for a period of time – as long as 26 months! But, any purchases made using a balance transfer card will automatically incur interest charges, some at rates higher than 20%

According to ASIC, 30% of balance transfer users end up increasing their debt by 10% or more. You should use a balance transfer to eliminate credit card debt, not add to it, so cut up that card as soon as you get it, then cancel it when your debt is gone.

You can read more about the traps of balance transfers here.

Experts are calling this a ticking debt bomb including Daniel Foggo from @RateSetterAUS. As of today you can sign up to 54 credit card deals where there's no interest charged on balance transfers. Critics say it can be a devastating trap. @GemmaActon #Debt #Credit #7News pic.twitter.com/9wymBC3HnC

Fewer bills and statements to keep track of!

For those with multiple credit cards, cutting them up can limit the number of statements you receive and how often you have to make separate payments – if you remember to actually close the accounts. We’ll cover this in greater detail below.

This can also work by cancelling and cutting up all but one credit card.

How to (sensibly) destroy a credit card

The phrase ‘cut up your credit card’ can be somewhat misleading, because that doesn’t always render the card useless. Thieves can still piece together your name, card number, BSB and expiry date from a few pieces, so simply doing a horizontal slash and dumping it in the nearest bin isn’t going to cut it here.

With a strong pair of scissors, cut both vertically and horizontally down the card, as well as along the security code and security chip. Data is stored in the security chip, so if you want to have some fun, make sure it’s fully destroyed by smashing it with a hammer!

Gather your pieces and either place them in separate bins or in the same bin on different days. This might seem like overkill, but fraud is rife today so you can never be too careful.

If all of this sounds a little too mundane, why not have some fun with it? Try:

If you’ve just overcome or are trying to overcome some serious debt, obliterating your card will probably be quite cathartic!

Don’t actually do this – burning plastic may expose you to toxic emissions.

The arguments against cutting up your card(s)

And now the reasons why not.

Cutting it up doesn’t cancel the card

This is critically important, especially if you have multiple different cards. While cutting up the card will remove it from your wallet, it won’t remove it from your card account – how is your bank supposed to know that you’ve destroyed it? Your credit card account will remain active until its expiry date unless you actively tell them you’re cancelling, and this needs to be done either in-person or over the phone. So essentially you can open a credit card account online, but can’t close it online, with the exception of a few forward-thinking providers.

Thankfully, new reforms by the Australian Government state that as of 1 January 2019, all credit card providers must give customers the option of cancelling their card online. According to the horribly-named Treasury Laws Amendment (Banking Measures No.1) Act 2018:

The licensee who is the credit provider under the credit card contract must establish and maintain a website that :

Getting back on track, you still need to actually cancel your card(s) through your bank in order to render them dead. Cutting them up still leaves you vulnerable to annual fees, other fees like missed payment fees, and credit card fraud. Your details are still floating around online somewhere, and a non-cancelled card can still be used to make purchases even if a physical copy doesn’t exist. 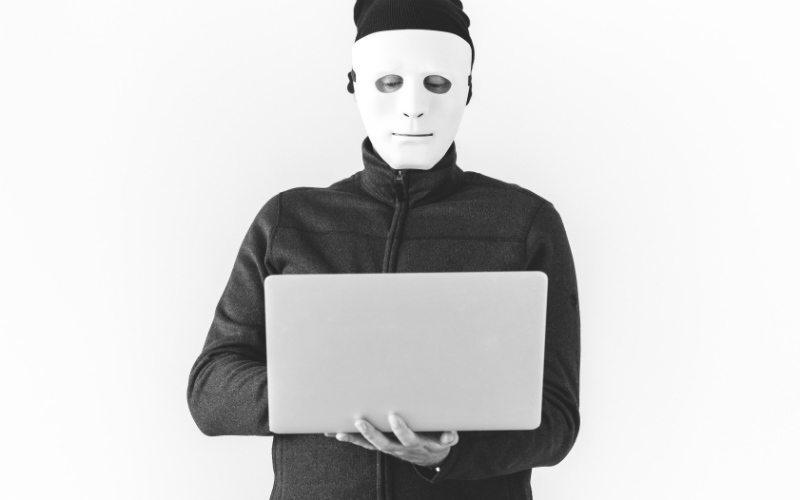 Don’t be alarmed, but this man could be stealing with YOUR credit card right now.

It doesn’t change your spending habits either

Cutting up your cards also doesn’t entirely eliminate your chances of accruing further debt. After all, you can still use the card online, and there also ‘buy now, pay later’ services like Afterpay and Zip that offer similar services to credit cards without the whole approval process.

Maybe you’re the problem, not the credit card? If you’re a reckless spender with a credit card, then it’s highly likely you’ll continue to be one without a credit card. You can still spend thousands of dollars easily with a debit card, just minus the interest.

Ideally, you’d want to change your spending habits before cutting up your card. Go through your monthly spending with a fine-toothed comb – look anywhere and everywhere for things you can cut out and create a budget. This might take a bit of discipline but will ultimately leave you better off.

You miss out on that emergency line of credit

Enough with the woes of credit cards, there are plenty of reasons why they can be useful. One of the biggest ones is the line of credit you have access to. Using it properly can be hugely beneficial – the issue with credit cards is that many people don’t.

If you’re struggling to make ends meet and end up in a car crash (that your insurance won’t cover), how will you pay for the multi-thousand dollar repair bills? It might be that you just don’t have the immediate cash to pay for it, but with a credit card, you do. This is just one example we’ve picked out, but having money available to borrow at a moment’s notice can be relieving for a lot of people.

Instead of cutting it up, you could lock it away in a safe behind a few inches of steel to prevent you from splurging with it.

Cutting up a credit card or two can psychologically reinforce your intent to limit short-term impulse spending, but don’t forget that your card will remain active until its expiry date unless you cancel it (which is set to become easier from the start of 2019).

If you have a real problem with overspending, cutting up your credit card won’t solve all your problems. You need to take a good hard look at your budget and your financial habits so you can look to change your ways.