The last few months have seen Aussies spending much more at liquor stores and computer shops than the same time in 2019.

Data obtained from Pocketbook by Savings.com.au shows a marked increase in spending on liquor, computer goods, cosmetic surgery, and gambling over the past two and a half months compared to the same period last year.

Meanwhile, some of the most common spending haunts - like supermarkets and grocery stores, pubs and bars, clothing retailers and travel agents - have suffered noticeable declines.

By far the biggest surge in spending was seen among computer retailers, which saw a huge 458% spike compared to last year.

Interestingly, spending cosmetic surgery and weight loss treatments were up by 68% and 28% respectively, perhaps indicating Australians are feeling some isolation blues about their appearances (Savings.com.au thinks you're beautiful just the way you are).

Another curious category to see a big increase in spend was caravan dealers, up 60% on the year. This could be a sign Australians are keen to get out and explore our own wonderful country with international travel off the agenda for some time.

With most of Australia confined to their homes for much of the year, it's unsurprising to see bottleshops (+21%) and takeaway meals (+3%) seeing spikes in spending, nor is it surprising to see online retail spending up 10% overall.

And of course, bookmakers had a good year, with Australians flocking to gambling solutions 53% more than last year.

Earlier this year, Alliance of Gambling Reform chief advocate Reverend Tim Costello told Savings.com.au people are gambling more as a way of self-soothing, or with the false hope gambling may solve their problems.

“Pocketbook data has revealed computer retailers are some of the biggest winners this festive period - whether that be friends and family gifting those working from home or consumers treating themselves to an improved home office," Freya Hunter, Head of Partnerships at Pocketbook told Savings.com.au.

"Likewise, spend on cosmetic surgery and weight-loss treatments - which typically see a spike post-festive period - are already well on the rise.

"It’ll be interesting to see what these figures reveal in the New Year, alongside the rise in gambling spend. As 2020 has afforded more people with extra time on their hands, bookmakers have been particularly busy.”

Some of the biggest casualties of the pandemic were travel agents, clothing retailers, cosmetics and beauty retailers, restaurants, pubs and bars, and grocery stores.

With both international and domestic borders being closed for much of the year, spending on travel agents understandably fell by a massive 71%.

Closer to home, spending on public transport almost halved (down 48%), with around half the country working from home at some point this year.

As Australian spending shifted to online marketplaces, spending in clothing retailers and cosmetic and beauty retailers fell by 11% and 20% respectively.

Naturally, spending in pubs and bars as well as restaurants is also down by 24-28% from this time last year, as Australia continues its economic recovery from the tough mid-year period.

“With travel the hardest-hit category this year, this is top of our Christmas wish list to kickstart again in 2021," Ms Hunter said.

"Talks of travel bubbles and COVID vaccines mean we hope it won’t be too long before this becomes a reality."

Previous Pocketbook data sent to Savings.com.au showed household savings doubled over COVID and tripled in the past three years, averaging monthly savings of $2,645 in July 2020. 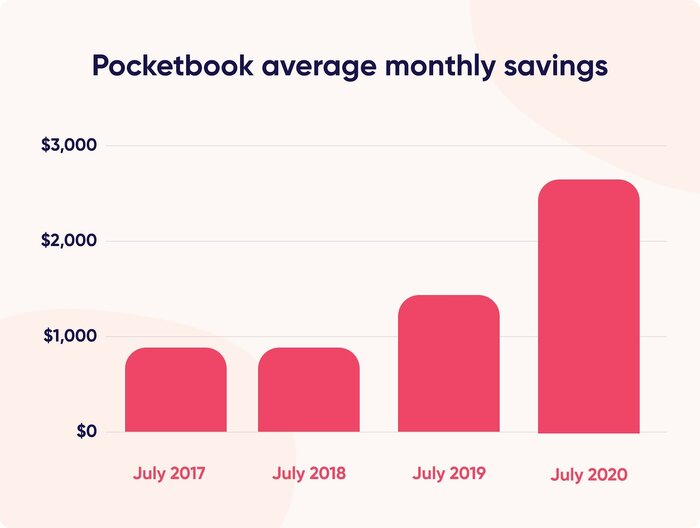 Photo by Tamanna Rumee on Unsplash