If it feels like living is more expensive these days, that's because it is, according to new data which proves it.

A new special research project by the Australian Bureau of Statistics (ABS) found that between 2012 and 2019, the cost of 'essential' everyday items like food and healthcare has outpaced inflation over the same period.

Over the period 2012 to 2019, cumulative non-discretionary inflation was 14.8%, according to the ABS, while inflation over the same period was 14%.

Discretionary spending, which is spending on non-essential items such as take away meals, alcohol and holidays, increased by less than inflation at 12.9%, and even less when tobacco is removed from the mix (6.4%).

Therefore if one wanted to save money, giving up smoking could be a good place to start. 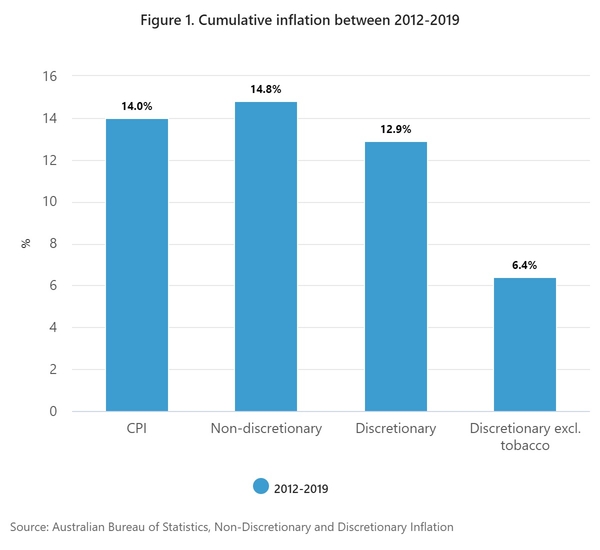 This means that life's essentials really have become more expensive over time, putting more of a strain on the average household's bank account.

That's despite low levels of inflation recently, although 2020's data could look a little different after Australia entered 'deflation' for the just the third time since 1949 in July, before rebounding 1.6% in the September quarter.

Non-discretionary spending, which can include anything "purchased because they meet a basic need or maintain current living arrangement or are a legal obligation", makes up the majority of household spending.

According to the ABS, this type of spending accounts for the majority of household spending, at 58.5% compared to 41.7% for discretionary spending. 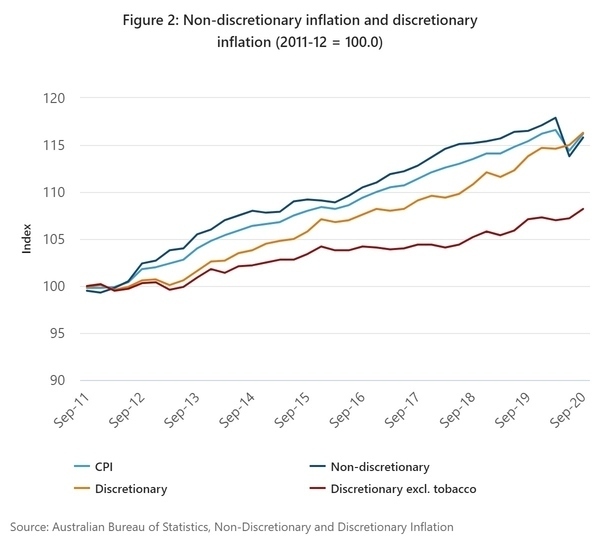 "Price increases in housing, health and education costs were the main contributors to non-discretionary inflation," the report's authors said.

"Figure 2 shows a fall and subsequent rise in non-discretionary inflation in 2020. This was the result of free child care being introduced in the June quarter and removed in the September quarter, as well as volatility in automotive fuel prices.

"Price falls for goods such as clothing, furniture, household appliances and motor vehicles were the main reason (for lower discretionary growth), while price increases for discretionary food has also been subdued in recent years."

This also means wages have only slightly outpaced inflation in real terms over this period, making it even harder for the average household to continue to afford the ever-more costly essentials.

In June 2020, Australia's annual wages growth went into the negative for the first time in two decades, falling to -0.7%.

The quarterly wage price index grew by 2.1% over the year to the March quarter.