Three out of five Australians are paying for online services they've stopped using, potentially wasting hundreds of dollars per year.

“When we went into lockdown people signed up to trial a number of streaming services forgetting they are paying on average $10 a month for each service costing nearly 400 dollars annually if they have three, which many people now do,” Mr Nicholas said.

“Many also subscribed to fitness apps to fill the void left by gym closures or learnt a new language to fill in the time and are unknowingly still paying a monthly fee even though they are not using it.

“It’s easy to rack up bills without realising with everything paid by direct debit – but now is the time to get finances in order.”

The phenomenon of wasting money on unused subscriptions isn't new. A study by REST Super discovered $4 billion is wasted annually from forgotten services, while those that are still used can cost an enormous sum of money.

Recent research from Reviews.org discovered internet, mobile, and streaming services will cost just under $140,000 over the average Australian's lifetime of 82.5 years. 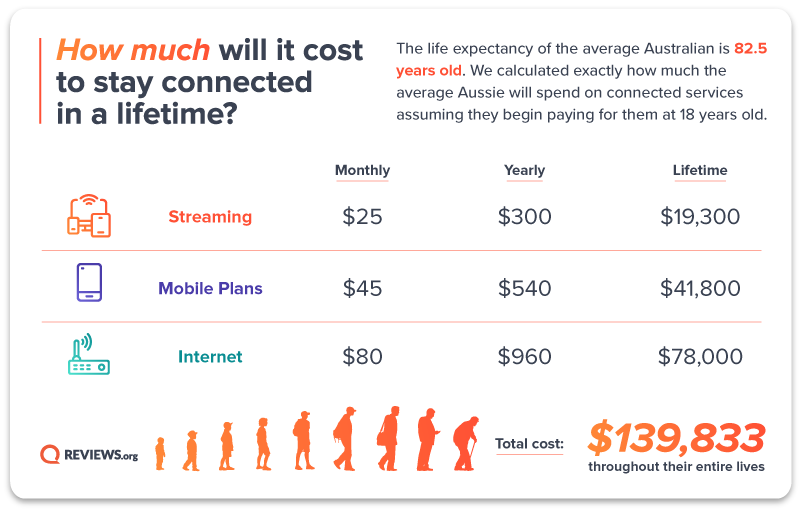 For this reason, Mr Nicholas wants people to review what services they're regularly paying for with a 'subscription intervention'.

“A subscription intervention - when people take stock of what online services they are paying for and scrap ones no longer relevant - could instantly save people as much as a thousand dollars a year," he said.

“Now, as COVID restrictions slowly ease, consumers are using a combination of in-person and online services, however those charges add up and without physical bills or regular reminders the subscriptions can be forgotten.

“It’s a good idea for people to get into the habit of setting reminders about online services and apps when they subscribe to ensure they are not throwing money down the drain.”

Despite their reputation for splashing needless cash on things like avo on toast, Mr Nicholas says it isn't younger generations that are the worst offenders.

“People of all ages are paying for services they are no longer using. In our experience we believe some millennials are a little more tech savvy than older Australians and are quick to put in place a system to ensure they don’t end up paying for unwanted subscriptions," he said.

Meanwhile, about 90% of subscription reminders from GetReminded belong to either streaming services, gyms and online software like Skillshare.

According to GetReminded, this problem is only going to get worse as more and more businesses move towards the subscription model, a trend exacerbated by the pandemic forcing companies to innovate.

"This [and opt-out automatic recurring payments] results in bill creep and often goes unnoticed as people keep paying as it appears as such a small amount of money on the bank statements so is often overlooked," Mr Nicholas said.

"It is not until you add up the subscriptions over 12 months and determine if you have been using them that you realise how much money has been wasted. It is quite alarming for many when they do this."

"Micropayments" not the answer

Last week it was announced that Eftpos would aim to bring Australia's first 'micropayment network' into the mainstream, allowing people to pay tiny individual fees for services and content online.

These fees could be as little as a fraction of a cent, and some proponents of the scheme say it could be an alternative to wasteful subscription fees.

An Eftpos spokesperson told Savings.com.au that it will simply allow a combination of different payment methods to be used.

“This depends on the individual businesses’ pricing models, but you can see a situation where a provider could offer both ‘pay as you go’ and subscription packages, depending on whether people want to be occasional or more frequent users," Eftpos said.

"This would help consumers try new services, manage their costs responsibly, and work out what’s best for them.”

However, Mr Nicholas disagreed that this method of paying will replace subscriptions.

"Effectively micropayments are still recurring payments, similar to a subscription model just repackaged differently to make the consumer feel as though they are paying less and may have some additional payments to be wary of," he said.

Photo by krakenimages on Unsplash