Consumer confidence and spending is rebounding, and the ability to travel again is a big reason why.

This week, Scott Morrison and New Zealand Prime Minister Jacinda Ardern announced the Trans-Tasman travel bubble that will commence on 19 April, while Virgin Australia recently announced more than 50% of its government-subsidised half-price airfares had been snapped up already.

“The overwhelming response from Australians demonstrates loud and clear that they are ready to get back in the air and travel and are a positive sign for the aviation and tourism sectors as they look to recover from the impacts of COVID-19,” the airline said in a statement.

According to Citi, airline spend improved 69% month on month, showing Australians are steadily returning to travel, although airline spending is still down more than 40% from pre-COVID levels.

“As anticipated, the travel categories are the most impacted with cruise lines and airlines experiencing the biggest drop in spend compared to this time last year," Mr Lum said.

"Despite this, government support measures, including its recently announced $1.2 billion tourism support package, are starting to show dividends with spend on these categories increasing.

"While in March we have seen consumers booking holidays, in April we should see holidaymakers spending in local economies, which will hopefully give domestic areas a much needed boost in consumer spending.

"Additionally, with a travel bubble to New Zealand opening up mid-April, we may also see overseas spend start to increase for the first time since the border lockdown.”

A report by ANZ said the impending travel bubble with New Zealand could "spark hope for Aussies eager to travel abroad and should lift confidence", but warned the impact could be dampened by concerns of future border closures.

Google searches for travel by Australians went through the roof in the days after the announcement, and ANZ economists Felicity Emmett and Charlotte Heck-Parsch said the early signs are promising.

"The immediate uptake by Australians and New Zealanders is difficult to gauge, given pent-up demand, but also some reluctance to fly given ongoing health and cancellation worries," they said.

"There are still deterrents to travel as new outbreaks may see borders shut any moment.

"Some level of hesitance will likely remain, particularly for those not travelling to see friends and family. The possibility of having to quarantine – and possibly finding out mid-flight – might make some Aussies and Kiwis more comfortable to holiday in their home country.

"Moreover, Australians burnt by state border closures and the resulting holiday cancellations may be wary of booking their Kiwi holiday only to have it cancelled because of another outbreak." 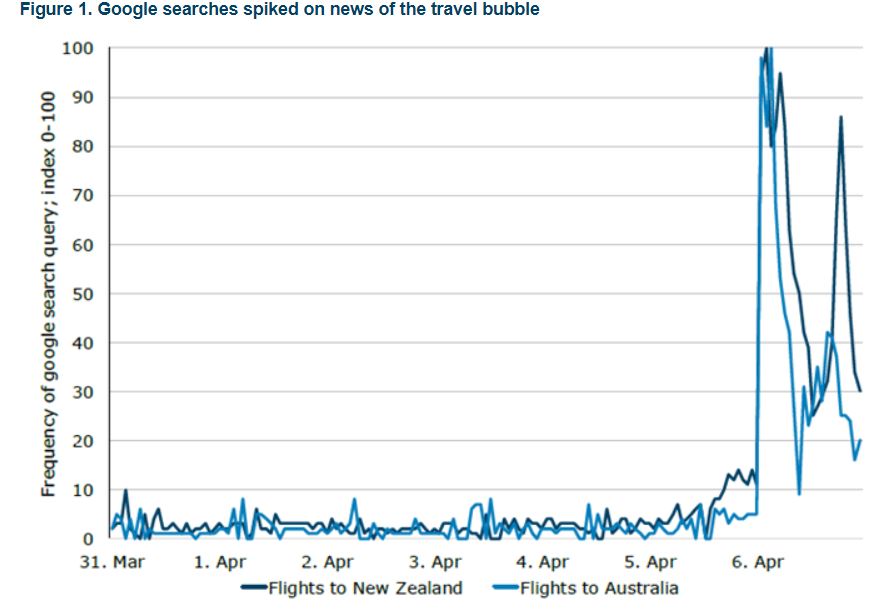 ANZ's report also said the vaccine rollout - however delayed it might be - is encouraging people to take up travel opportunities.

"Ultimately, the trans-Tasman bubble is a win-win for travel-loving Australians and New Zealanders," ANZ's economists said.

"From a solely economic point of view, the border opening will have a small negative impact on trade, but the confidence boost of a return to some semblance of travel normality should provide some offset."

Jacinda Ardern estimated that travel from Australia to New Zealand will get back to 80% of the pre-pandemic level by the start of 2022, and the airlines have already boosted their capacity in response.

Qantas announced an initial lift in capacity from 3% pre-COVID capacity to 83%, and is offering up to 122 return flights per week to New Zealand along with Jetstar.