New data released today by illion and Accenture shows how Sydneysiders spent up big in their first week out of lockdown.

Services such as hairdressers and beauty salons were sorely missed, recording the most significant spike across spending categories compared to the lockdown average and a ‘normal’ average of January 2020.

Holiday planning was also back on the agenda, with residents increasing their spending on future holidays by more than 200% in the first week after lockdown.

illion’s Director of Data and Analytics, Nicholas Robinson said that Sydney's first week of freedom appeared to have followed a fairly 'logical' process.

"Haircuts and preening on Monday and a trip to the department stores to continue the tidy up on Tuesday," Mr Robinson said.

"On Wednesday we hit the pub, and on Thursday, food delivery was required for obvious reasons." 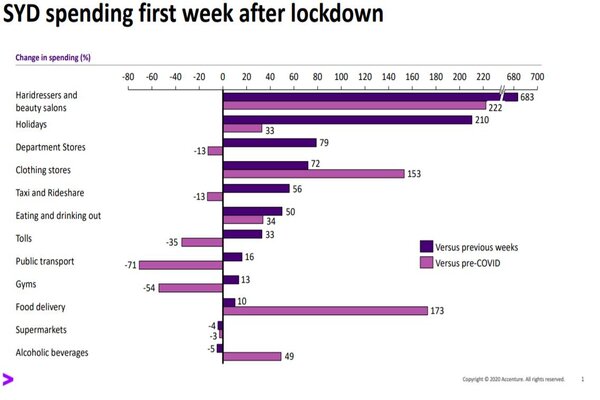 Spending categories not expected to benefit from restrictions easing

Decreases were noted in spending across bottle shops and liquor stores, dropping by 5% in the first week after lockdown.

"One unexpected winner coming out of lockdown was food delivery having already seen an astronomical rise during lockdown, is now showing that it now may be a hard habit to now break," Dr Charlton said.

Image by April Pethybridge via Unsplash