What's happening to the minimum wage in 2021? The Federal Government is calling for a minor increase to the minimum wage in 2021, while unions are asking for a more substantial rise.

The yearly-adjustment, set to come into effect on July 1 this year and mandated by the Fair Work Commission, will be an important announcement for some following the difficulties of 2020.

The Morrison Government has cautioned against a "major" increase to Australia's minimum wage, saying it had concerns about job creation and small businesses during the coronavirus recovery.

In its submission to the Fair Work Commission's annual review:

"Higher labour costs during this challenging period could present a major constraint to small business recovery and may dampen employment in the sector," it said.

"The risk of domestic outbreaks and ongoing disruptions to other major economies mean the economic environment remains uncertain.

"Given the current uncertainties in the domestic and international economic outlook, the Government therefore urges the Panel to take a cautious approach, taking into account the importance of creating jobs for Australians and ensuring the viability of the businesses, particularly small businesses, which provide the jobs which are crucial to the economic recovery and the wellbeing of Australian families."

The government cited studies in its submission stating larger increases are thought to have more notable negative employment impacts, particularly during recessions and downturns.

"The ability of employers to respond to wage increases during a downturn would likely be compromised exacerbating negative employment impacts."

However, a paper from the Reserve Bank of Australia reported no evidence that small, incremental increases in award wages have an adverse effect on hours worked or the job destruction rate.

The latest unemployment figures from Australian Bureau of Statistics (ABS) show the unemployment rate fell to 5.8% in February, down from levels in excess of 7% seen in 2020.

The Australian Council of Trade Unions (ACTU), a key body in minimum wage discussions, has argued for a $26-per week increase to the minimum wage (up 3.5%).

That 3.5% is within historical ranges, and matches the roughly 3.5% specified by Reserve Bank Governor Philip Lowe in 2018 that was needed to meet the bank's inflation target.

ACTU assistant secretary Scott Connolly was critical of the government's submissions, citing soaring company profits which rose 15% over the past 12 months.

"They can't have it both ways."

“If wages don’t increase it threatens the entire recovery. Money in the hands of working people is what will create sustainable economic growth, not bigger profits for big business," Ms McManus said.

“If it is a “V” shaped recovery for profits it needs to be for wages as well. Profits rose 8.9% through 2020 and the Reserve Bank says wages growth should be above 3%.

"If minimum wage workers do not have money to spend, local businesses feel it the most.” 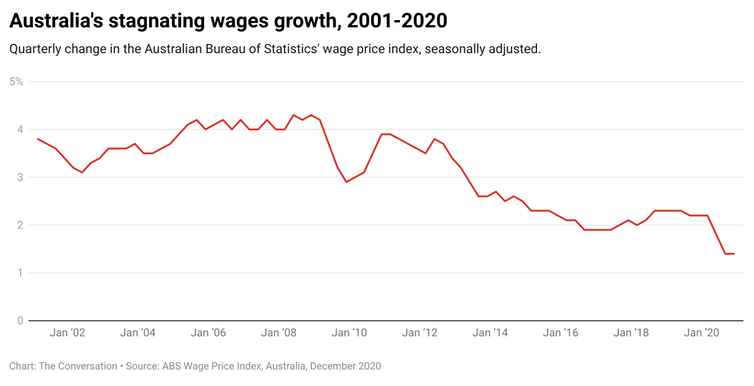 Amid the submissions to the Fair Work Commission, various employer groups have argued for a delay or outright freeze to 2021's minimum wage increases.

Restaurant and Catering chief executive Wes Lambert for example said increases should not be applied to hard-hit sectors until 2022.

“The commission has reset, potentially permanently when wage increases happen for industries that have been disproportionately affected by COVID-19,” Mr Lambert told The Australian.

The National Farmers' Federation wants the minimum wage frozen "until economic conditions improve", while the The National Retail Association wants its increases to be delayed until November this year.

Menulog managing director Morten Belling told the committee it would trial paying its workers a minimum wage, leave entitlements and superannuation, which would be a first in Australia.

“We think we’ve got a moral obligation to do more,” he said.

The gig-economy, which includes food delivery services like Menulog or Uber Eats, has attracted plenty of criticism recently for its poor working conditions and pay, as workers are classified as contractors and not employees.

Many gig workers don't receive basic entitlements, and a report in 2020 from the Actuaries Institute found gig-economy workers were tens of thousands of dollars worse off in retirement.

It also noted gig workers were overrepresented by vulnerable groups in society - young workers, students, and the formerly unemployed.

“The rapid rise of the gig economy has brought both opportunities and risks for workers, raising some important policy issues, particularly with regard to long term financial security,” Actuaries Institute Chief Executive Elayne Grace said.

“With the economy evolving rapidly, particularly under the influence of the COVID-19 pandemic, it is increasingly important that we better understand the risks to workers and how they might impact on future public policy."

Mr Belling said Menulog would work with both Fair Work and the Transport Workers Union (TWU) to develop new standards.

“We do believe that the current modern awards out there are not suitable for the industry we’re working in,” he said.

Uber, the largest ride-share company which is now Australia's second largest employer, did not make the same commitment but said it was open to the idea, as did Ola and Deliveroo.

Uber Eats general manager Matthew Denham said drivers earned an average of $21.55 an hour during peak meal times - which is actually below the casual minimum wage of $24.80 per hour.

Ola Executive Director Ann Tan also said it would "generally support any policy positions that provide a better outcome for our drivers and a level playing field for all industry players big or small."

Photo by Jennifer Bedoya on Unsplash