Photo by Cristine Enero on Unsplash

Released today, the September 2019 household lending figures from the Australian Bureau of Statistics (ABS) show that the seasonally-adjusted number of loans to owner-occupier first home buyers fell from 9,804 loans in August to 9,622 in September.

The share of first home buyers in the owner-occupier home loan market – which had been steadily rising since December 2018 – also dipped, falling 0.8 percentage points from its seven-and-a-half-year high of 29.8% in August to 29.0% in September. 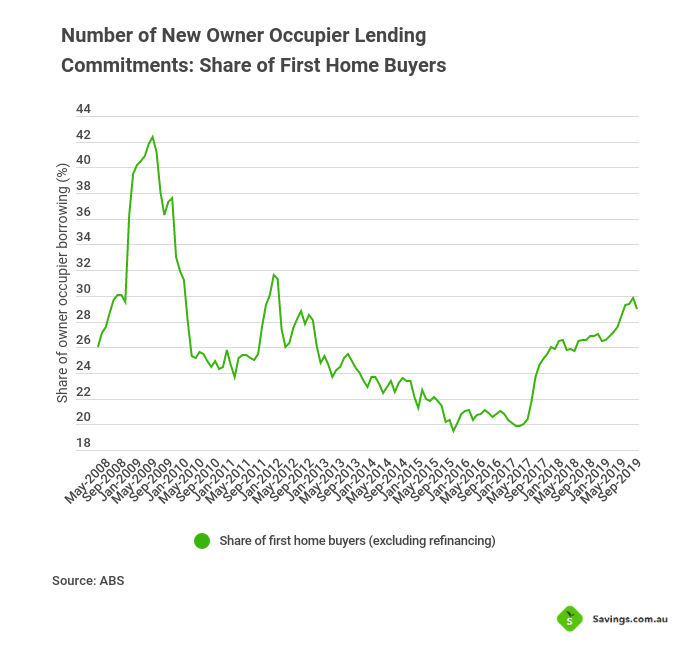 The decline coincides with the recent turnaround in average property prices across the country, with CoreLogic’s national home value index for September recording what was the largest monthly gain since March 2017.

National housing values rose 0.9% over the month, before rising another 1.2% over October – now the largest monthly gain since May 2015.

“Housing prices are once again rising across most regions of the country while growth in household incomes remain sluggish, which will create renewed housing affordability pressures in markets where home values are rising faster than incomes.”

“In the past, rising home values and greater participation from investors has seen first home buyer activity reduce. ”

The table below displays three low-rate fixed interest-only home loans currently available for investors, featuring a low-rate pick from each of the following categories: The Big Four Banks, The Top 10 Customer Owned Banks, and the Larger Non-Banks. Products sorted by comp rate*

But a surge in investor loan approvals did not materialise over September, with the ABS data showing a 4% slide in the value of investor loans from August – reversing most of August’s 6.5% gain.

Rather, it appeared to be the more experienced owner-occupiers that pushed some of the first home buyers out of the market in September, with the number of lending commitments for non-first home buyers surging 5.6% in seasonally adjusted terms.

Overall, the value of owner-occupier home loans (excluding refinancing) rose 3.2% in September, taking it up 5.6% through the year, which is the strongest annual growth rate in 20 months.

“The transmission of monetary policy through interest rate reductions to lower mortgage rates is working – contributing to a revival in the Aussie property market,” Mr Felsman said.

“And in further good news for borrowers, the Reserve Bank said in its Statement on Monetary Policy today that ‘the average rate paid could decline further in coming months’ if competition for high quality borrowers continues. “

Economists have widely tipped that the next cash rate cut from the Reserve Bank will take place in February 2020, although some are expecting one to come as early as next month to encourage households to spend big this Christmas.